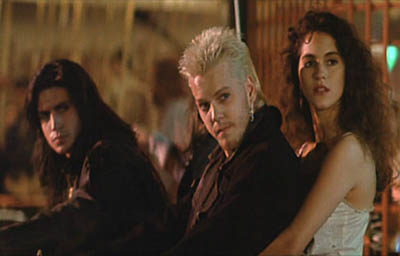 Editor Ruth Werner
Ruth Werner kindly wrote in to tell us that the girl with the rat kissing her in the beginning is a genuine local character in Santa Cruz, a friend of a friend and the rat is (was) named "Rat-Rat". Dan Carley adds that "her name is Carrie Stevens. She originally started showing up in the punk scene in the mid 80's around the San Jose area, at least that's where I knew her from. A nice enough gal, but you wouldn't want to be on her bad side!!! Carrie and her best friend, local punk Beth Godwin, introduced rats to the Bay Area punk scene long before Lost Boys was filmed. So frenchen out with one was no biggy to us."
Thanks to Jillian Ronsonet
Billy Wirth's character "Dwayne" is never actually mentioned by his name.
Rewind Archive
Warner Bros. and Joel Schumacher are hoping to launch a new film franchise with a follow-up to the Directors 1987 vampire flick. The plan is to create a female variation of the first films story which is tentatively to be called The Lost Girls. According to the Hollywood Reporter, Schumacher will be involved in the project in only a producer capacity, though he came up with the sequel and potential franchise idea. The film is currently in development through Village Roadshow for Warner Bros. Word has it that the films producers have also put out word to writers or a writer-director to come on to the project and get it rolling to the next step. At this point, the second films story will pretty much follow that of the first focusing on another family that has moved into the town that has a vampire problem. The twist, of course, is that they soon discover that the "local babes" are creatures of the night with an appetite for blood.
Rewind Archive
Gertz has her publicist to thank for her family. She and her husband, financier Tony Ressler, have been married for seven and a half years and have two sons, Oliver and Nicky. Gertz recalls: "I was dating someone my publicist didn't like. She met Tony and thought we'd be great and fixed us up. She brought me to a park and we met... I fell in love instantly. At my wedding I sat her next to the man she later married and they have two babies now. So I paid her back."
Thanks to Jillian Ronsonet
If you look closely in the scene where Lucy and Max meet in the video store, behind Max is a poster for the fellow vampire/comedy flick "Once Bitten" starring Lauren Hutton and Jim Carrey.
Thanks to Graeme
There used to be a hardcore/punk band in America called "Death by Stereo", taking their name from the classic line in the film and they use a sample from the film on their first album "If looks could kill, I'd watch you die".

But their web site is sadly no longer.
Thanks to Kris Morgan
The film was sampled for a British hardcore dance tune called 'Death By Stereo' by DJ Dance including 'You drank someone's blood-are you crazy' & 'No he's my brother', the original was only released on a promo white label & is very rare.
Thanks to Mj12
In the scene with the "nazi" characters dancing on the beach that end up getting killed, it's actually a nod to an earlier movie, "Surf Nazis Must Die."
Thanks to Olivier
If you look carefully, you can spot Kelly Jo Minter in Max's videoshop.
Thanks to Jeff Knobloch
Jason Patric is the grandson of the legendary actor Jackie Gleason and he owns a 90 pound vietnamese potbellied pig named "Fergus".
Thanks to David Lauritzen
Jason Patric is also the son of the late Jason Miller who won the Tony Award and Pulitzer Prize in 1973 for writing "That Champion Season" and who played Father Damien Karras in "The Exorcist".
Thanks to Brianne Messman
In the movie "Dream a little Dream" (that Corey Feldman and Corey Haim also star in together), Corey Feldman has a Lost Boys poster in his room. It's very noticeable after he first finds out that he is "coleman"... He is looking in the mirror in his bedroom and you can see the poster on the wall in the backround.
Thanks to Jeff Knobloch
Corey Feldman, who plays Edgar Frog, and Barnard Hughes, who plays Grandpa, share the same birthday, July 16th.
Thanks to Gemma C
Kiefer Sutherland is Donald Sutherland's son. Donald Sutherland also starred in a vampire movie in the 90's called "Buffy the vampire slayer".
Thanks to BRANDY
Joshua Miller, Jason Patric's kid brother, was also in a vampire movie released in 1987. It was "Near Dark' starring Lance Henrikson and Bill Paxton. It was supposedly overshadowed by the success of 'The Lost Boys'.
Thanks to Daniel Torrez
The comic book store where Corey (Haim) meets the Frog brothers was an actual store in Santa Cruz for many years (not sure how many). It was called Atlantis Fantasy World and the owners can be seen playing the pinball machine in the background.

There was a set built in front to make it "appear" as though it was on the boardwalk but it was actually downtown. I bought my first Star Wars figures at that store!
Thanks to Mg Loco
In Sam's (Corey Haim) room there is a poster of Molly Ringwald from the "Sixteen Candles." And what's with that sexy poster of Rob Lowe on his closet door?
Thanks to Ray Mendoza
The scene in which David and the rest of the Lost Boys wake up and fly out of the cave towards Sam and Micheal's house is actually footage played in reverse. It's the same footage used for when the scene after Michael and Star make love, the cloud scene into the cave. Watch the scene of them flying out and notice the tides.
Rewind Archive
Billy Wirth, who plays Dwayne, appears to have just three lines in the whole movie... When the boys take Michael to the bluff, Dwayne tells Laddie "We're going for a ride". At the railroad tracks, he says "Michael wants to know". Then at the very end of the movie, when Sam misses the arrow, he said "You missed sucker"...

It is often said that, in fact, he has just two... Because Billy Wirth did not actually say the line "You missed sucka!" Legend has it that it was actually said by his stunt double. However Billy Wirth does in fact say the line. On The Lost Boys 2 disc DVD, Corey Haim confirms this. Dwayne says the line "you missed sucker!" Sam fires the arrow and Dwayne laughs, then it cuts to him flying backwards into the stereo system. It shows a close-up of Dwayne screaming as he is being burned, which at that point Corey Haim on the commentary says, "see that's not Billy." So that part was the stuntman, not when he says "you missed sucker!"

It could be easy to think it wasn't Billy Wirth saying the line, but if you listen carefully to Corey Haim, he definitely says it's the stuntman after "you missed sucker!" and not when he says it. Also, the facial features definitely match the ones of Billy Wirth, whereas when he is being electrocuted, his face and nose have a different shape.
Thanks to Charles Davenport
Jason Patric and Jami Gertz also worked together in the 1986 film Solarbabies.
Thanks to Ashton
The comic store in the Lost Boys called Atlantic Fantasy World is still going today. However, the original location was destroyed during the '89 earthquake. The comic store is now on Cedar St. in Santa Cruz.

The owner, Joe (the one in the background in the black shirt) has a photo of Haim, Feldman, and Newlander up in the store, along with one of the rare copies of "Vampires Everywhere"--the fake vampire comic. He has a photobook of pictures he took during the set building near his shop.

Funny fact : IMDb did not made a link between the two through Chapman's page.
Thanks to Anonymous
Billy Wirth (Dwayne) appeared in season 1 of "Charmed" as Matthew Tate, a powerful warlock and antagonist (Episode 9, The Witch Is Back)

The following trivia for "The Lost Boys" is apparently bogus. If you disagree or have additional info, please update us.

Billy Wirth actually has another line. In the scene where Star gets on the bike with David, Laddie gets on the back of Dwyane's bike & Dwayne says something like "You ready?". Not sure of the exact words, but he does say another 3 little words :) Just wanted to point that out.
Next: Behind The Scenes
Or use the menu to select another option
1987 Warner Bros.
1999-2018 fast-rewind.com
V4.0b Powered by Rewind C21 CMS
Please Share The 80s Lve!
Support this spam free and non-commercial site
Copy
Thank you for sharing us!