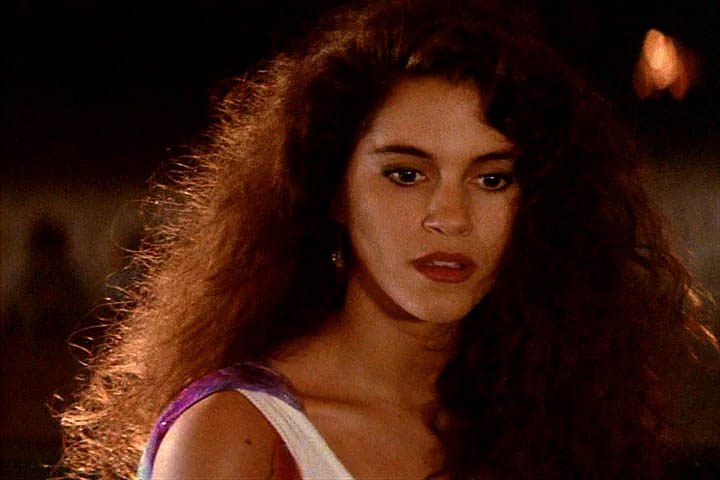 Thanks to Tori
When Sam is having a bath, the rug at the bottom of the stairs is length ways when he goes up, but has changed when he comes back down, to width ways.
Thanks to Emily Cohen
The scene where Michael (Jason Patric) and Star (Jami Gertz) are doing the naughty in the bed in the cave, you see Laddie (Chance Michael Corbitt) sleeping in it before they get in and he never gets out.
Thanks to Jennifer
When Billy Wirth's character gets hit the first time by the bow and arrow he lands on the floor with his arm one way then when the camera pans back his arm is now a different way.
Thanks to Becky
On the part where Sam was upstairs singing and bathing, and Michael was downstairs vamping out and drinking milk out of the carton, he falls and drops the milk. In that shot we see the milk is wasted on the floor, and the carton is sitting one way, but when the boys mom walks in later and picks up the dropped milk, the floor is clean (no milk) and the carton is facing a different direction.
Thanks to WRAITH 81
When the vampires are leaving the cave, the waves are going backwards.
Thanks to WRAITH 81
Near the middle of the movie, you see Michael has a transparent reflection as he is only half vampire. But earlier in the movie, others who are full Vampires in the video store cast full reflections in the glass counter.
Thanks to Anonymous
When Max is at the dinner table and Sam spills water on him; watch his dinner jacket. It's wet one scene; not the next; then it's wet at the bottom and not; then just the lapels are wet.
Thanks to chimpanshane
When Sam, Michael and the Frog Brothers are preparing for the coming of vampires, in the scene when Michael closes the windows, you can clearly see the reflection of one of the crew's faces in the cabinet glass.
Thanks to Stacey Panton
The waves outside of the cave are in reverse as the vamps leave - this is because, as the film was so low budget, the scene of them entering the cave is re-used -but in reverse.
Thanks to lucy haim
When sam is in the bath there is shampoo on the side when he ducks under the water it is gone.
Thanks to Tina Wilkie
When Michael is in his room and starts to vamp out, you will see as he is going out the window he knocks the phone off the hook right "before" the Mom calls and Sam answers.
Thanks to dee
When Micheal is floating the pulls the telephone off the hook and then the phone rings and Sam answers to his mum.

But, nothing bogus that we know yet for "The Lost Boys".
Next: Some Extra Goodies
Or use the menu to select another option
1987 Warner Bros.
1999-2018 fast-rewind.com
V4.0b Powered by Rewind C21 CMS
Please Share The 80s Lve!
Support this spam free and non-commercial site
Copy
Thank you for sharing us!