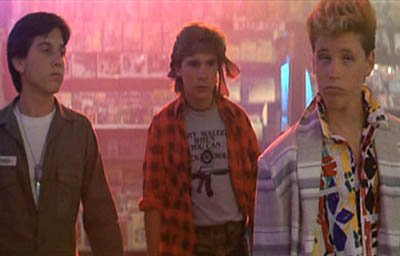 See Alex Winter before they were famous!

Thanks to Jeff Knobloch
The title of the film is a reference to the companions of Peter Pan, who remained forever young.

More Trivia from The Lost Boys

Directed by "St. Elmos Fire" director Joel Shumacher and starring an 80's popcorn movie cast, The Lost Boys is easily one of the smartest and funniest vampire movies ever made. Many of the cinematic vampire legend innovations used in later movies were invented by Shumacher and his team for this film.

Credit for the excellent vampire prosthetic makeup is also due. No wonder then that the makers of the 1998 vampire movie, "Blade" called upon the same talents for their vampire makeup.

In the role of leader of the vampire gang, we find a young Kiefer Sutherland, showing the trademark charisma that would make him one of the finest, most intense young actors of the 80's and 90's. A great supporting cast including the two Coreys (Haim and Feldman), who also starred together in "License to Drive" the following year.

In the female love interest role, we find under-rated Jami Gertz, who would later 'star' (sorry bad pun) alongside Steve Guttenberg in "Don't Tell Her It's Me" and later, in the 90's rip roarer "Twister".

Set in the mythical west coast resort town of "Santa Carla", a thinly disguised Santa Cruz, the movie seamlessly blends true horror with comedy and romance in such a style that it affected every vampire movie that was to follow.

The movie rightfully attracted a cult following with its mould breaking MTV vampire concept and is a classic that like fine wine, seems to get better with age.

Sexy, sassy teen vamp comedy that broke the mold on vampire movies. A classic amongst classics.

Stunning, genre busting update to the vampire genre. One of the first of the modern 'pack of vampires' movies.

Are you kidding? Couldn't be better.

Jump To: Music & Soundtrack Vibes
Or use the menu to navigate
1987 Warner Bros.
1999-2020 fast-rewind.com
V4_27 Powered by Rewind C21 CMS
Please Share The 8s
Support this spam free and non-commercial site
Copy
Thank you for sharing us!