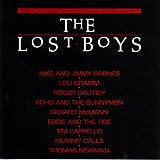 Thanks to sarah
The song "I still believe" by Tim Capella performed by the band in the movie was remade by a Christian pop artist, Russ Taff also in the mid eighties
Rewind Archive
Jimmy Barnes, who guests with INXS on two tracks, performed at the opening of the Sydney 2000 Olympic Games along with Kylie Minogue.
Rewind Archive
Roger Daltrey, the lead singer of rock band 'The Who', performs a version of 'Don't Let The Sun Go Down On Me'.
Thanks to Marissa Eddings
Tim Cappello the ultra buff sax player/singer who performs "I Still Believe" in The Lost Boys is also a sax player for many famous artists, including Tina Turner. Tim appears in Tina's music video "We Don't Need Another Hero", the theme song to Mad Max Beyond Thunderdome. Curiously enough, Tim wears what looks like virtually the exact same outfit in both the Tina Turner video and in the Lost Boys performance. IMDB says Tim also appeared as a keyboardist in "What's Love Got To Do With It", the film version of Tina Turner's life with Ike Turner. Hopefully he's wearing a different outfit!
Thanks to Jim
The bike race on the beach has a backing track provided by Lou Gramm lead vocalist of 'Foreigner'.
Thanks to Christian Stefferud
Did you know that the chorus for the theme somg "Cry Little Sister" was sung by about a dozen 10-13 year old boys before the lead vocals were done? The only reason I know this is because I was one of them! That soundtrack is timeless and I probably hear that song about once every couple months. Brings back memories. It took us multiple cuts to get the tracks down, but it was finished in under a day.

The Lost Boys featured the following pieces of instrumental music:

Jump To: The Juicy Trivia!
Or use the menu to select another option
1987 Warner Bros.
1999-2018 fast-rewind.com
V4.0b Powered by Rewind C21 CMS
Please Share The 80s Lve!
Support this spam free and non-commercial site
Copy
Thank you for sharing us!