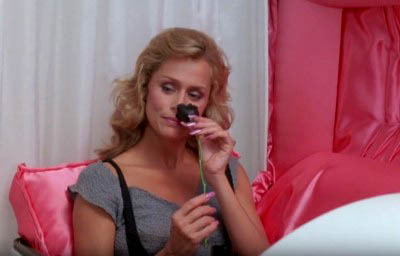 Editor Nick
Jeff Hause, writer of 'Once Bitten', like a scene from a Tarantino movie was working at Sam Goody, "earning minimum wage as a clerk in the video section" at the time that the movie was released on Video.

"My co-workers had to point me out every time the movie was rented by a customer ('See that guy vacuuming the carpet over there? He wrote it!!!').

Worse yet, if I concealed my identity then I had to listen to the customers' rotten reviews of the film when they brought it back. One unknowingly offered, "Whoever wrote this shouldn't be working in Hollywood"

You can read more of his memories on this page.

More Making Of Once Bitten

In the Eighties, losing one's Virginity was a pivotal point in a young mans life, crossing the threshold into manhood and proving that you could SCORE!

Well thats how most movies treated it, and "Once Bitten" is no exception.

Mark Kendall is trying to be patient with his adorable, but prudish best girl Robin. Robin thinks they should wait for the right moment, not have a few minutes in a car. Mark is upset, but since he loves Robin, agrees to wait again.

Best buddies Jamie and Russ try to act as if they are experts on the issue of sex and suggest they go into Hollywood one night, meet some strangers and get the whole pressure of Virginity off of Marks mind, then he wont feel so strained waiting for Robin to be ready.

Why Mark listens to these guys is beyond me, seeing as Mark is the one with a sweet, devoted girlfriend and these guys are pathetic losers -but I chalk that up to plot development.

Meanwhile, The Countess -a beautiful but ancient blond vampire needs her fix of virgin blood by Halloween and is on the prowl in Hollywood looking for one. Because Hollywood is where one goes to find virgins I suppose?

Oh well She does find one and lures Mark back to her vast mansion to feed. He passes out and she has him believing they had a sexual encounter and promises they will meet again.

Robin finds out about the tryst from loudmouths Jamie and Russ-but forgives him because she is so devoted to him.

Meanwhile, thinking he can put all this behind him, Mark finds himself getting sensitive to sunlight, craving raw meat and wanting to nap in the trunk in his room. His parents chalk this up to puberty, his friends suspect he has beome a vampire.

The Countess doesnt want to give up this pure blood and pursues him to finish getting the 2 more bites she needs. This will fulfill her blood requirement and also turn Mark into a full vampire.

Her pursuits result in some embarrassing moments and a very funny dancing showdown between Robin and The Countess (this was the Eighties, there was no under-dogs unite and fight the masses montage sequence, so this was created I suppose)

Mark now shuns this woman, he just wants his pure love relationship with Robin. The Countess hears the clock ticking and devises a plan that results in the movies climax (no pun intended) and good use of Jim Carreys facial contortion genius.

A very funny movie, seeing Jim Carrey looking like a High School student is fun and the expressions he makes while under The Countess spell are classic.

Lauren Hutton is perfect as The Countess and the priceless Cleavon Little is cast as Sebastion, her gay, classy assistant/butler-with great success. Great just for fun movie.

I am still baffled by Robin's devotion, even when Mark cheats on her. The fact that sex is portrayed as cheap in the earlier part of the film.

Jump To: Music & Soundtrack Vibes
Or use the menu to navigate
1985 MGM
1999-2020 fast-rewind.com
V4_27 Powered by Rewind C21 CMS
Please Share The 8s
Support this spam free and non-commercial site
Copy
Thank you for sharing us!