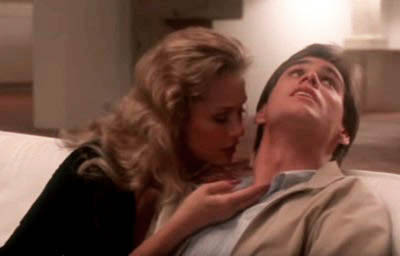 Thanks to Amy Green
Karen Kopins starred as a live-action version of the 'Archie' comic strip character, Veronica Lodge, in the NBC-TV movie, "Archie: To Riverdale and Back Again" (1990).
Rewind Archive
This was Jim Carrey's first real movie, he is top billed as a star, even before he was on "In Living Color".
Thanks to Kevin Allustiarti
Jim Carrey shows amazing flexibility during the dance scene by taking his leg across his body quite high and not bending the knee; watch it slowly, it almost hurts to watch!
Rewind Archive
Karen Kopins starred in "Dallas" as Kay Lloyd during the 1988-89 season and ironically enough, despite starring as sweet and pure Robin in Once Bitten, she portrayed Fiona Richards, a Madame, in the TV movie "Lady In Waiting" in 1994.
Rewind Archive
Lauren Hutton's smile is celebrated in the documentry film "Gapped Tooth Women".
Thanks to Jenny
Megan Mullally plays Robin's friend Suzette in the film. If you watch closely, she is the girl selling the tickets to the Pre-Halloween Hop, she more recently played Karen Walker Finster on "Will and Grace".

But, nothing bogus that we know yet for "Once Bitten".
Next: Behind The Scenes
Or use the menu to navigate
1985 MGM
1999-2020 fast-rewind.com
V4_27 Powered by Rewind C21 CMS
Please Share The 8s
Support this spam free and non-commercial site
Copy
Thank you for sharing us!