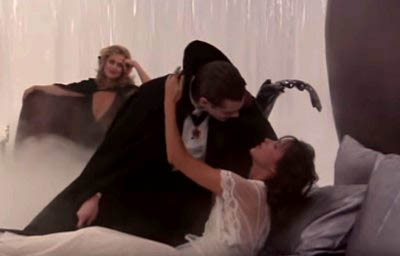 Rewind Archive
Michael J. Fox was the writers original choice for the role of Mark. Producer Sam Goldwyn Jr. was sent a videotape of Fox, but he felt he would never carry a big screen film ("Back to the Future" opened about two years later and the film Fox did instead of "Once Bitten", "Teen Wolf", grossed about $50 million more than this film).
Editor Nick
Originally, the Countess was going to be played by Elvira.
Rewind Archive
I am not sure about in 1985, but Jim Carrey has developed a reputation for taking on attributes of the character's he portrays in his films. He emulated Andy Kauffman during "Man on the Moon" and was very anti-social on the set of "The Grinch" -except to the dog that played Max who he insisted on having stay with him all the time.
Rewind Archive
Jeff Hause, the writer of the original script (it was subsequently heavily rewritten) remembered how it got done:

"In 1984, I was in college, studying to become either an illustrator, sculptor, or animator -- I couldn't decide which. While sitting around in my dorm room doing nothing but avoiding the dreaded decision of my ultimate career choice, I wrote a screenplay for $2000 (that's TWO thousand -- not twenty thousand, not two hundred thousand) with my old friend Dave Hines for a producer who will remain nameless (not by me -- but by his reputation and track record).

It was called "Nightlife", and was about a teenager who gets bitten by a female vampire in Hollywood.

From this tiny seed, even tinier seeds would eventually grow."

You can read more of his memories on this page.

Shucks.. We don't know of any cut scenes from "Once Bitten". Can you help? Please add one for others to enjoy. It's quick & easy
Next Section: Alternate Versions

Aw, man.. We don't know of any alternate versions of "Once Bitten". If you know better, please add one for others to enjoy. It's quick & easy
Jump To: Filming Locations
Or use the menu to navigate
1985 MGM
1999-2020 fast-rewind.com
V4_27 Powered by Rewind C21 CMS
Please Share The 8s
Support this spam free and non-commercial site
Copy
Thank you for sharing us!