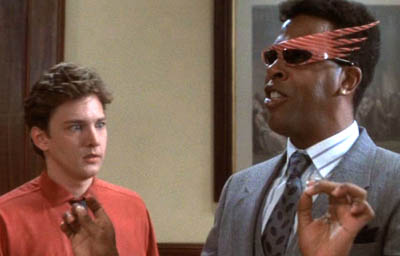 Thanks to intothesea13
G.W. Bailey likes playing dimwitted officers! He portrayed Captain Felix Maxwell in this film, and was also the hilarious blowhard, Captain Harris in the "Police Academy" films.
Rewind Archive
'Mannequin' was followed by an ultra-brittle (meaning bogus) sequel 'Mannequin 2: On the Move' in 1991, starring Kirsty swanson. Next......
Thanks to Wayne Pieper
Ultra-flexible actor Meshach Taylor played the daring character 'Hollywood' with utter abandon. He had previously been seen as the unfortunate character 'Dr. Kane' who lost his legs in the elevator in "Damien: Omen II".

Other than Hollywood, his most famous roll is Anthony Bouvier in the hot late 80's/early 90's sitcom "Designing Women". After that, he spent four years playing Shel Baylor on "Dave's World", and has hosted shows on the Travel Channel.

Other notable previous roles were in "Explorers" and "The Howling".

Other than Hollywood, his most famous roll is Anthony Bouvier in the hot late 80's/early 90's sitcom "Designing Women". After that, he spent four years playing Shel Baylor on "Dave's World", and has hosted shows on the Travel Channel.

Other notable previous roles were in "Explorers" and "The Howling".
Rewind Archive
Mannequin was written and directed by Michael Gottlieb, who had to wait until 1993 for another go with the Hulk Hogan vehicle ""Mr. Nanny".
Thanks to emi
Topher Grace and Jessica Alba are rumored to be in talks for a remake.
Thanks to kap83
Prior to Mannequin, Andrew McCarthy and James Spader acted together in "Pretty in Pink". They also acted together in "Less Than Zero"
Thanks to HawnGuy
Kim Catrall's movie career went into a deep fizzle but got revived thru the smash HBO series "Sex In The City".

Meschach Taylor and Estelle Getty briefly had hit TV shows that... [lol] seemed similar. Getty had "The Golden Girls" on NBC and Taylor had "Designing Women" on CBS.

Unfortunately, Getty sadly passed away in the summer of 2008.
Thanks to Becky Parsons
Kim Cattrall was born in Liverpool, England.
Thanks to Becky B.
Carole Davis (Roxie Shield) and Kim Cattrall (Emmy) cross paths again (not sure if they come face to face) in a 1998 episode of SEX IN THE CITY, THE POWER OF FEMALE SEX (Season 1, Episode 5) in which Carrie's Euro friend, Amalita (Davis) picks up the tab for Carrie's shoes with the help of her handsome rich man, Carlo, and invites Carrie for drinks later. When Carrie takes her up on the invite, Amalita introduces her to a visiting Parisian architect, Gilles, whom Carrie eventually hooks up with and unexpectedly receives a $1,000.00 cash bonus envelope in the a.m. post his departure from the hotel room. Samantha (Cattrall), Charlotte and Miranda come by the hotel for room service breakfast on Gilles pondering the receipt of $$ for one night of passion with a Parisian. Is it the Euro way?
Thanks to Anonymous
The scene where Jonathan and Emmy were preparing the window display using a treadmill, Jonathan's pants weren't really supposed to be torn off by the walker but by looking at the scene and seeing how much the camera was shaking, because of the laughter of the filming crew, the scene was ultimately kept. This scene was far funnier than the originally planned scene of just turning on the treadmill and the actors being delighted that everything worked.

But, nothing bogus that we know yet for "Mannequin".
Next: Behind The Scenes
Or use the menu to navigate
1987 20th Century Fox
1999-2020 fast-rewind.com
V4_27 Powered by Rewind C21 CMS
Please Share The 8s
Support this spam free and non-commercial site
Copy
Thank you for sharing us!