PG
AKA:
1985
“
The adventure begins in your own back yard 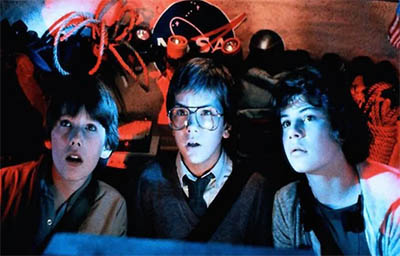 Rewind Archive
This was the first movie role for both Ethan Hawke and River Phoenix. During the shooting of a TV movie "Surviving", River's agent contacted his family with news that "Explorers" casting director wanted River to test for a role. This was the big break the Phoenix's were looking for. River described the opportunity as "a movie kid's dream", although he initially resisted the role of the "geek".

Starring the late River Phoenix in an almost unrecognisable 'geek' role and a young Ethan Hawke, Explorers is the tale of kids that are invited by an alien species to come and visit them.. although we don't realise that until near the end.

Up until that point we follow them in an unusually nicely made young teen film. The characters are fleshed out nicely and sensitively portrayed by the young cast.

The kids are sent plans in their dreams of an electronic circuit that makes a spherical force field (built by Phoenix's geek character). This seems all well and good until someone gets trapped inside it momentarily and that gives them the idea to make a 'spaceship' that they can surround with the field and go off travelling...

Directed by Joe Dante and as in every Dante film, Dick Miller makes an appearance, this time as a cop who spots the kids in their home made spacecraft from a police helicopter and tracks them down. He plays an interesting character who seemingly just wants to share in the wonder of their experience...perfect for an early teen fairytale.

We have the obligatory pubescent female love interest provided by Amanda Peterson, who only 12 at the time was to later play the part of Cindy in "Can't Buy Me Love".

The problem with this film is the ending. Without giving too much away (that I haven't already!) it kinda loses the plot in the last section and the director knew this as soon as he'd screened it for a test audience. Shame, as most of the movie is very charming.

Jump To: Music & Soundtrack Vibes
Or use the menu to navigate
1985 Paramount pictures
1999-2020 fast-rewind.com
V4_27 Powered by Rewind C21 CMS
Please Share The 8s
Support this spam free and non-commercial site
Copy
Thank you for sharing us!