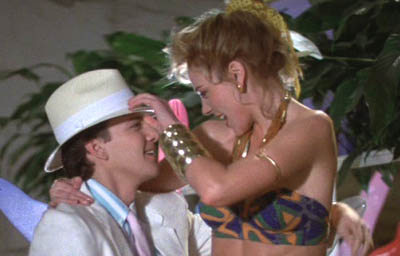 Jonathan and Emmy dance their way through the store in this classic 80s montage.

Thanks to MKane Jeeves
Originally the lead part was written to be an older, lonely storekeeper, with Dudley Moore in mind for the role, but when Andrew McCarthy came on board, the part was rewritten to be the part of a young artist.

In a recent interview, McCarthy recalled realizing what he had signed up for just before production started:

"And so I read it, and was like, Yeah, we can do this. And then right before we started shooting, I read it again, and I was like, What? What am I doing? This is a movie about a guy who falls in love with a mannequin! I told [my agent], I've got to get out of this movie. Theyre like, You read it. It starts on Monday. Youre not getting out of it.

Anyway, it actually works out fine, because its a very sweet movie in many ways. Its so uncynical, and so unhip and savvy. Theres something about it thats very pure. Its lovely."
Thanks to Wayne Pieper
Hollywood's pink caddy was on loan from a classic car collector from Gettysburg Pa. Meshach Taylor, who played hollywood is a very friendly person. My sister and I sat in the pink caddy with him and talked to him for a few minutes just before they shot the scene because he overheard her from the crowd, which was watching the filming, saying she'd like to have one someday. All the extras were local to the Harrisburg area for the scene where McCarthy's girlfriend gets picked up in front of Illustra.

Shucks.. We don't know of any cut scenes from "Mannequin". Can you help? Please add one for others to enjoy. It's quick & easy
Next Section: Alternate Versions

Aw, man.. We don't know of any alternate versions of "Mannequin". If you know better, please add one for others to enjoy. It's quick & easy
Jump To: Filming Locations
Or use the menu to navigate
1987 20th Century Fox
1999-2020 fast-rewind.com
V4_27 Powered by Rewind C21 CMS
Please Share The 8s
Support this spam free and non-commercial site
Copy
Thank you for sharing us!