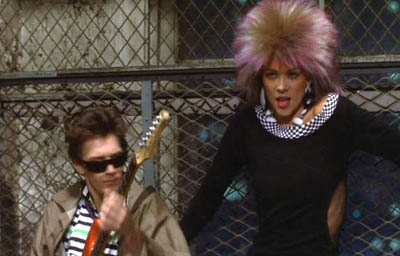 Do You Dream About Me..?

Rival store "Illustra" was portrayed by Boscov's Dept Store in Camp Hill, two hours away from Philadelphia on the PA Turnpike. Most of the decorations are nearly the same, though the store has since been expanded to take over 1/4 of the mall it is connected to! [Thanks to Gail Dull / Desiree]

At the intersection of Locust Street and 15th Street, you will find the former location of Dewey's Restaurant which was used for the 'fiery' restaurant meeting that Jonathan and Roxy have.

At the corner of Market Street and 11th Street is the Gallery (which spreads east to 8th St.). With more than 230 shops and restaurants under one glass roof, it is one of the largest shopping centers in the nation and the sub-basement was the setting for the climactic 'mannequin chopper' scene at the end of the movie.

The scenes where Andrew McCarthy runs up and down the steps at the Illustra store were filmed in Boscov's dept. store in Camp Hill, PA, outside of Harrisburg, PA. [Thanks to Kelly L]

I believe you can see the famous brass eagle on the main floor of Wannamakers in one of the aerial shots along with the great organ. Both were from the 1897 Centennial that and previous era Exhibition and purchased by Wannamakers. "The Eagle" in Wannamakers was a standard phrase known by all Philadelphians of that era. [Thanks to Charles Locke]

The store is now a Macy's and the Eagle is still there. [Thanks to Mike Reilly]

If you know of a good link for Mannequin locations, please let us know.

We are pleased to be able to bring you a sneak peek at what LX locations will be available for Mannequin upon release:

Please Note: The status of some entries in this preview may be wrong because they are in-progress or need updating before release.
Jump To: Bungles & Goofs
Or use the menu to navigate
1987 20th Century Fox
1999-2020 fast-rewind.com
V4_27 Powered by Rewind C21 CMS
Please Share The 8s
Support this spam free and non-commercial site
Copy
Thank you for sharing us!