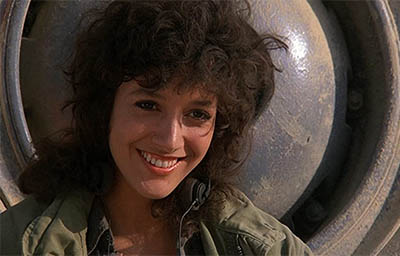 Thanks to boadicea23
Vic Cianca, the police officer directing traffic was a real Pittsburgh cop who did his routine exactly as filmed in downtown Pittsburgh.

Cianca was nationally famous for his on-the-job dance numbers until he retired shortly after the film was made. He passed away in 2010 at age 92.

The first glossy Simpson/Bruckheimer (they went on to produce "Beverly Hills Cop", "Top Gun", "Days of Thunder" etc) producer's vehicle (Simpson had just been fired from Paramount as head of production, so he needed a hit as an independent producer), Flashdance is one of those films that is maybe better in the memory than it is on the screen.

It certainly has gloss, with excellent cinematography, including over-done filter usage (A Simpson/Brucheimer trademark), a high octane multi-platinum soundtrack and cliched 'triumph of the little people' type premise. Producer Simpson was one of the first people to recognise and harness the power of the emerging music channels like MTV to publicise and promote movies.

However, when I re-viewed it recently, I was struck by how, when watched again, it seemed like just a bunch of nicely filmed scenes sewn together. It seems to lack the one big ingredient of most classic 80's movies... real, true heart.

What she yearns for is a true career in dance and she aspires to joining an upscale ballet school, but doesn't have the confidence to apply.

When she starts an unlikely romance with the boss of the construction company that she works for, he both secretly helps and also gives her the courage to live her dreams. The concept is typical 80's fairy tale (she even has a fairy godmother in the form of an elderly, charismatic ballerina to give her advice and inspiration), but somehow the heart is lost in the commercialism of the production.

Even the dancing seems ludicrously staged when viewed now. Still the music is great and the director (British born Adrian Lyne -"Fatal Attraction", Nine 1/2 weeks" who originally didn't want the job) managed to impart a sense of atmosphere and almost film noir through the cinematography at times. It doesn't seem to have aged quite as well as some less likely (or expensive) movies... That's the real surprise here ...

A 'classic 80's' MTV style 'chick flick', for sure, but one that we may remember as being better than it actually seems. Maybe shows the more commercial, exploitative nature of the 80's than the "Live your dreams" part that its trying to copy...? Or is it me?

Jump To: Music & Soundtrack Vibes
Or use the menu to navigate
1983 Paramount pictures
1999-2020 fast-rewind.com
V4_27 Powered by Rewind C21 CMS
Please Share The 8s
Support this spam free and non-commercial site
Copy
Thank you for sharing us!