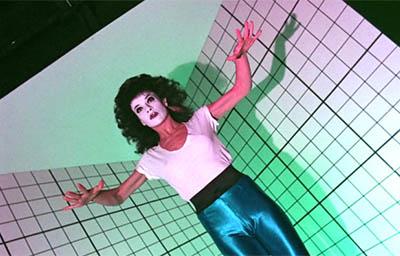 Construction worker by day and theatrical "flashdancer" at night...

Rewind Archive
Jennifer Beals was just 19 when she won the role of Alex in the movie. The role was very highly contested in Hollywood. Everyone seemed to be after it, including Demi Moore. After the movie, Jennifer attended Yale majoring in American literature.
Thanks to Linda and Lorena
Actress Sunny Johnson, who played Jeanie, tragically died of a brain aneurysm on 06/19/84; barely a year after the films release.
Thanks to Marina
Lee Ving, the lead singer and guitar player of the band "Fear", played the sleazy club-owner.
Thanks to Alicia
Lee Ving also appeared in the movie "Clue", where he played Mr.Boddy.
Thanks to Frank Cupo
Ron Karabatsos who plays Jake Mawby, owner of Mawby's Bar, is a retired New Jersey cop.
Thanks to Paris
Jennifer Beals stars in showtime t.v series "The L'word".
Thanks to Nat
Jennifer Beals also starred in a film in the late 1990's called 'The Devil In the Blue Dress' co-starring Denzel Washington
Thanks to Becky Parsons
At Yale University, Jennifer Beals was in the same class as David Duchovny.
Thanks to Alex
The men who are breakdancing by the railroad tracks are are members of the Rock Steady Crew.
Thanks to Stephanie
Cynthia Rhodes, who played the dancer Tina Tech in "Flashdance", went on to play the part of Penny, Patrick Swayze's original dance partner (the one who almost died from the back-alley abortion) in "Dirty Dancing".
Thanks to Pat2
The man known as "Crazy Legs" is actually called Richard Colón. He had to do the spinning on his back scene because they asked him to teach that move in only one day! He said that it wasn't possible to learn that move so quickly, so he ended up doing it himself.
Thanks to Ellen
Virtually NONE of the dancing is done by Beals - rule of thumb: if you don't see her face, it is not her.
Thanks to Nick Napolitano
Jennifer Lopez was actually sued by Paramount for recreating scenes from this movie without permission, so I guess she won't be in the remake after all. The movie 'Honey' looks like a remake of it anyway.
Thanks to Melodi
Jennifer Lopez recently did a music video in which she recreates scenes from this movie. (It's also rumored that there will be a remake of Flashdance and that she'll play Alex.)
Thanks to GoldTransAM
Cynthia Rhodes who played Tina Tech filled in as a lead singer for the pop group Animotion.
Rewind Archive
Cynthia Rhodes gave up acting after appearing in "Curse of the Crystal Eye" (1991) and is married to singer Richard Marx, they have three children.
Thanks to Lainy
Jennifer Beals later played alongside Sting in the 80s remake of "Bride of Frankenstein".
Thanks to Kerry
I was working as a (female) industrial construction electrician in Pittsburgh in 1983. In fact, they shut down one of the sites I was working on in order to shoot some scenes of the "Alex" character welding.

When the movie came out I went to see it but thought it was pretty bogus. And I would know! I was a ballet and modern dance student and performer with companies all through grade school, high school and into college.

Also, in college in the early '70's when it was nearly impossible to find part time work as a student, I and many of my female friends worked as "go-go" and "exotic" dancers in the many clubs around Pittsburgh that offered such entertainment, like the Go-Go Lounge in McKees Rocks, the Red Onion in downtown's Market Square and the Electric Banana near the University of Pittsburgh campus.

That kind of work was actually pretty convenient for a student -- back when the minimum wage was only 1.60 an hour we could make 30 to 40 dollars (usually cash under the table) for 4 hours of dancing on the stage at one of these bars, usually from 10 pm to 2 am when they had to close. Due to the strict State Liquor Control laws in Pennsylvania, we were not supposed to fraternize with the patrons or even talk to them (a bar owner could lose their liquor license if a dancer did that -- the laws were intended to suppress prostitution). There were usually 3 or 4 dancers in any shift so each of us only had to perform for 15 to 20 minutes per hour, choosing our own music on the jukebox.

In between sets we could study and do our schoolwork in the dressing room. I was writing papers while sitting at a makeup vanity with a sweatshirt over a g-string and pasties! And since I worked in construction I new exactly what a blue collar gig was like. That work entails getting up before dawn and then spending 8 to 10 hours doing continual physical labor with one half hour for lunch and two 10 minute coffee breaks. NO WAY could somebody do that all day and then dance at a club until the wee hours. So the idea that "Alex" danced at a club was pretty ludicrous.

Besides the fact that "Alex" was shown as a full welder when she was allegedly 19 years old. She would have still been an apprentice and not likely to be welding unsupervised. And that job was prevailing rate -- either she was in a union or being paid the same wage, which at that time was between 15 and 20 dollars per hour. She would not have needed to work in a club to get by if she was taking home 600 or more a week in a city as cheap to live in as Pittsburgh.

I know the film was a fantasy, but it was a pretty ludicrous one. Another absurdity was to think that a panel evaluating a prospective dancer for a ballet company would be "impressed" by her presentation of what was essentially a gymnastics routine. Ballet companies require a specific set of disciplines which are taught over years of ballet training. Even with her lessons from the old dancer (Hannah) Alex would not have had company training and would not have known the terminology and protocols of choreography or rehearsals. The idea that they would hire her for the company because she could break dance would be equivalent to a symphony orchestra hiring somebody to play the violin because they demonstrated they were good at playing the conga drums.

It was also ludicrous to me that somebody with the opportunity to learn a lucrative lifetime trade like industrial welding would aspire to be an underpaid apprentice in a dance company. I was a professional dancer but realized early on that it was not only a demanding career but one that meant I would have to live in relative poverty (as in sports, few become stars in the dance world and most have short careers due to the physical demands of the work). I even had a college degree and could have followed into academia or science. But I lucked out and got into a skilled trade in my early 30's and found it to be challenging and interesting, kept me in physical shape and gave me a level of independence both in free time and in financial security that I never would have had in dance. I still dance, but on my own time and how I want to do it.

Anyway, though I liked seeing the Pittsburgh sites in the movie, overall I found the film silly and the correlations of the sites they showed never made sense if you recognized the locations. A better movie that shows Pittsburgh in a realistic way is "Dominic and Eugene" starring Tom Hulce, Ray Liotta and Jamie Lee Curtis.
Thanks to TKO
The breakdancers that perform on the street are in fact members of The Rock Steady Crew. One of them, Frosty Freeze (Wayne Frost) is seen demonstrating the suicide flip. A move he invented and where he was most famous for. The Rock Steady Crew also performed in other hip hop related movies, such as: Style Wars, Wild Style and Beat Street. After battling a long illness Wayne Frost sadly died in New York on April 4, 2008. He was only 44 years old.
Rewind Archive
Donald Peterman was nominated for the Oscar for Best Cinematography. So was Michael Sembello & Dennis Matkosky's song "Maniac."
Thanks to C.T. Warren
The late great cartoonist Charles M. Schulz paid a hilarious homage to the film in 1984 with his musical special "FlashBeagle!". In it, a series of shorts feature Charlie Brown and the Peanuts Gang doing early 80's-style song & dance numbers, leading up to Snoopy (dressed in a torn t-shirt & headband) copying Alex's dance moves in a nightclub for the title song, to thunderous applause!
Rewind Archive
Jennifer Beals was nominated in the Best Actress in a Motion Picture - Comedy/Musical category. So was the film for Best Motion Picture - Comedy/Musical.
Rewind Archive
Beals won the Image Award for Outstanding Lead Actress in a Motion Picture.
Thanks to Jim K
Jenifer Beals writes her actual birthdate of 12/19/1963 on her application form. There are several websites that point this out, however I could not find any reference that she also lists her parents as Alfred Owens and Jeanne Therese Anderson. -Her actual parents are Alfred Beals and Jeanne Cohen.

The date of her application is January 1983. She lives on 7 Wood St in Pittsburgh, and was born in Altoona, PA (as was her father).
Rewind Archive
Joe Eszterhas was nominated for the Razzie Award for the Worst Screenplay.
Thanks to Stephanie
The film has 4 taglines: 1.) "What a feeling." 2.) "When the dancer becomes the dance." 3.) "Take your passion... And make it happen!" 4.) "Something happens when she hears the music... it's her freedom. It's her fire. It's her life."
Thanks to Linda and Lorena
Liz Sagal played a dancer named Sunny in the movie. She's the twin sister of Jean Sagal and younger sister of Katey Sagal. She and Jean had a TV show in the 80's called "Double Trouble".

But, nothing bogus that we know yet for "Flashdance".
Next: Behind The Scenes
Or use the menu to navigate
1983 Paramount pictures
1999-2020 fast-rewind.com
V4_27 Powered by Rewind C21 CMS
Please Share The 8s
Support this spam free and non-commercial site
Copy
Thank you for sharing us!