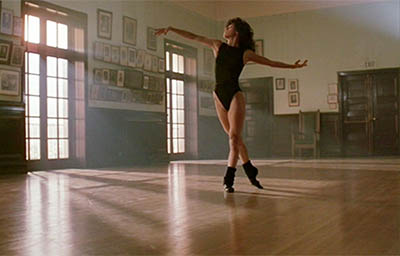 Alex yearns to be a classical ballet dancer.

Editor Nick
Tom Hedley, who wrote the story and early drafts of the screenplay, based his story on the life of Maureen Marder, a construction worker by day and a dancer by night at a strip club in Toronto, Canada.

You can read more of the alleged backstory of the development of the "Flashdance" story/script in this excellent article.
Thanks to Troy
During the fight scene between Richie (Kyle T. Heffner) and Cecil (Malcolm Denare), Denare accidentally punched Heffner in the face during the first take. Adrian Lyne shot as many takes as he could before Heffner's face was too swollen to match the other shots. The smack that you hear in the film of Denare's fist hitting Heffner is the actual sound of the blow.
Thanks to Nick Napolitano
Jennifer Grey from Dirty Dancing auditioned for the part of Alex, and was crushed when she didn't get it.
Thanks to Jennifer Wey
The woman who did most of the dancing for Jennifer Beals and the guy who did the dancing for Kevin Bacon in "Footloose" dated and are now married in real life!
Rewind Archive
Catherine Mary Stewart of "The Last Starfighter" fame auditioned for the role: she is a trained (classically) dancer and singer. It was allegedly cheaper to hire Beals and the three others (and not give them credit) then it would be to hire her.
Rewind Archive
Paramount tried very hard at one point to get David Cronenberg to direct the movie. He repeatedly turned it down, saying "You won't thank me! I would destroy this!"

Flashdance was a pet project of a female Paramount Pictures executive. The script went through about 4 screenwriters before being completely re-written from scratch. British director Lyne had to be asked 8 times by Paramount to direct before he finally relented. Seemingly, he hated the script (all the versions).
Thanks to Anonymous
The only lighting on the set during the strobe dancing sequence was from 2 Norman studio strobe heads. As a result, the camera operator couldn't see anything in the viewfinder and a wire "sports finder" had to be rigged to the camera. A number of people had to leave the set because the strobes at 6 flashes per second caused them problems. This scene was probably the first time that strobe lights had been synced to a film camera in a major motion picture.
Rewind Archive
Brian DePalma was set to direct but dropped out to do "Scarface".
Thanks to Sahara
The producers of the film couldn't decide on who to pick for the lead role, Jennifer Beals, Demi Moore, and another unknown actress, so they asked the male crew members to tell them who they would prefer to be with; Jennifer Beals won by a landslide.
Thanks to Jonathan Lim
The sweatshirt with a large ragged neck hole worn by Jennifer Beals was accidentally invented by Beals herself.

She had simply cut the collar off an ordinary sweatshirt that had shrunk in the wash and her head could no longer fit through it. Director Adrian Lyne loved the look and used it in the movie.
Cast/Crew Tom Willett
I worked as an extra in the Mawbry's Bar scene in Flashdance. I was a customer in the bar and during the costume party scene I was dressed as Abe Lincoln.

None of the people I talked to during the filming thought this movie would ever have any success. Only the director seemed to be enjoying the progression of the film. When I heard the story being described, I figured the movie would come out and maybe make a million or two then disappear.

Adrian, the director had the last laugh. The movie made more than $100 million before it completed it's initial run.

I saw the movie and I had to admit, it had a style of its own. It was the first mass marketing of break dancing. It was the forerunner of most music videos even up to today. It was a major pop culture influence. I was wrong.

Jeffrey Hornaday was the choreographer. I talked to him a lot on the set during our spare time. He had been selling sunglasses just a few months before he got his big break with this film. He also worked on DC Cab but this was his big break. Later he choreographed "A Chorus Line."

While I sat in the bar (it was a Skid Row building in L.A.) I could not understand the significance of the girl being doused with water while she danced. When the film was released that became a "must" scene for most early music videos. Wet girls became very "in."
Thanks to Nick Napoliatano
Jennifer Beals had a number of body/dance/stunt doubles for the more complex dance moves. One of them was even a man!

For the final audition scene, Jenny had three stunt doubles. One was Marine Jahan, who did the ballet-ish moves.

Another was Sharon Shapiro, a record holding UCLA champion (having won all four events plus the all-around in 1980, best in vault, she did the diving in the air).

The third was the male breakdance legend called Crazy Legs, who obviously did the spin on the back --wearing a curly black wig and, if you look carefully, he has a mustache!
Editor Nick
The original name of the script was "Depot Bar and Grill"

Shucks.. We don't know of any cut scenes from "Flashdance". Can you help? Please add one for others to enjoy. It's quick & easy
Next Section: Alternate Versions

The following versions of Flashdance are apparently real. If you disagree or have additional info, please update us.

Thanks to Nick Napolitano
The original 1983 or 1984 network TV version had numerous cuts, alternate dialogue, and one alternate angle.

First, in the scene where she comes home and asks Grunt if he got laid, the line is replaced with: "You're getting fat, Grunt. You gotta work out".

Then, Richie's offensive Polish jokes are replaced with "this guy". Next, a very memorable one. When Alex and Nick are eating lobster and Katie asks if they went to the steel mill on their first date, instead of saying "I f****d his brains out", an alternate take was shot with her saying, "As a matter of fact, we made mad, passionate love!"

When Alex goes to the Zanzibar, there is a new stripper with her long hair covering her breasts. When Alex pushes Johnny C. on the stage or whatever, there was an alternate shot where you can just see all the guys messing around.

And finally, when Alex leaves with Jeanie, there is an alternate shot from behind them to hide Jeanie's breast exposure. Other cuts are just for language, including "p*ssed off" and "ass", two words that are very allowed on network today.

Add another alternate version...
Jump To: Filming Locations
Or use the menu to navigate
1983 Paramount pictures
1999-2020 fast-rewind.com
V4_27 Powered by Rewind C21 CMS
Please Share The 8s
Support this spam free and non-commercial site
Copy
Thank you for sharing us!