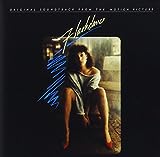 The classic 80's soundtrack includes the massive hits "What a feeling" and "Maniac" -it has always been readily available on CD. For some reason it doesn't include the song that Jeanie ice skates to, which was "Gloria" by Laura Branigan.

More recently a digitally remastered special edition was released with greatly improved sound quality. Use our media guide to find it.Update Us

Editor Nick
Despite having a worldwide #1, Irene Cara, who sung "Flashdance: What a feeling" was apparently shamefully robbed by the record company.

Only after a long and horrific legal battle did she start to see any proper royalties.
Editor Nick
Giorgio Moroder has said that "What a Feeling" is probably his favorite song of the ones he has created for movies.

"It has a good melody. The structure is good. Irene Cara sung it beautifully. The lyrics are good. The arrangement [is good] and it fitted the movie so well"
Thanks to Jobin Damm
I worked at a Pittsburgh movie theater as an usher when the movie was released and in the trailers for the upcoming film, the title song was sung by a man and not Irene Cara. It had different lyrics than the existing version "Flashdance...what a feeling". I think the lyrics had something to do with "making your dreams come true"...I don't know the singer or the exact lyrics and have always been curious as to who may be singing, I have always thought it may be the man who sang "Lady, lady, lady" on the soundtrack and in the film.
Rewind Archive
The song "Maniac" was originally written for a horror movie called "Maniac". Michael Sembello decided to change the whole idea of the song from a murderer to a girl who loves to dance.
Rewind Archive
Giorgio Moroder, Keith Forsey & Irene Cara won the Oscar & Golden Globe for the title song.
Rewind Archive
Irene Cara won People's Choice Awards for the film's title song in the Favorite Motion Picture Song & Favorite Young Performer Song categories.
Thanks to Nick Napolitano
The soundtrack sold more than 700,000 copies in the first two weeks of release. The title tune "Flashdance...What A Feeling" was a number one single for six weeks, and went on to become platinum. Irene Cara won a Grammy for this song ("What A Feeling"), and also co-wrote it with Keith Forsey and Georgio Moroder. In 2001, she and DJ Bobo created an awesome remix.
Thanks to Eric Ward
Moroder and Forsey had to convince Irene Cara to sing the title song. she didn't want another "Fame" experience, but she changed her mind and co-wrote the lyrics within an hour on the way to the studio after seeing the big finale dance scene.

Rewind Archive
Giorgio Moroder won the Golden Globe for Best Original Score in a Motion Picture.
Editor Nick
Giorgio Moroder initially didn't want to score Flashdance. He has said in interviews that he feared that it was going to be a soft core type of movie. Only after being asked several times did he finally relent and suggest that he would view the completed film and make a decision -but actually had very little interest in even doing that and passed the job of viewing the tape to his then girlfriend while he worked on other projects.

Only after she tearfully described the movie as the "best ever" did he realize that he had to do it.
Editor Nick
Hungarian composer Sylvester Levay, who often collaborated with Giorgio Moroder (eg: Cat People, Scarface) also contributed a lot to the score including orchestrations and arrangements.

Jump To: The Juicy Trivia!
Or use the menu to navigate
1983 Paramount pictures
1999-2020 fast-rewind.com
V4_27 Powered by Rewind C21 CMS
Please Share The 8s
Support this spam free and non-commercial site
Copy
Thank you for sharing us!