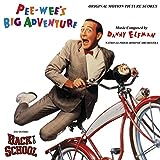 Back To School Soundtrack

Back To School featured the following songs:

The music in the film is a good mix of 80's pop music.

During the scene when the tough guys are having a party, dressed as cave men, a song called "Everybody's Crazy" is playing in the background. It's a song by Michael Bolton, he did a hair band style rock album back then of which this was the title track (pre adult contemporary cheese). I just thought it might be interesting because virtually nobody knows that he did such an album. [Thanks to Jason Fortier / Brad Duren]

Alice Cooper wrote a song for the "Back to School" soundtrack, but it was not included in the film. The song, titled "The Great American Success Story" is on his 1986 MCA album "Constrictor". [Thanks to Brad Duren]

It's a shame that Rodney Dangerfield's live (no lip synching like Ferris Bueller) rendition of 'Twist & Shout' wasn't included on the soundtrack...

...Well on second thoughts...Update Us

Thanks to Jason White
Did you know that this 80's "tour de force" has spawned such a cult following that the popular alternative band SUM 41 used a scene from the film as inspiration for one of their videos? The video takes place at a diving meet, where the entire school body is in attendance, a la "Back to school", and the band performs the dives. This video is so true to form, there is even a William Zabka esque protagonist present. For me, the true genius lies in the final dive that the band attempts, but the spoiler stops here. If you're true "Back to school", fan, go home, sit in front of MTV for like four hours and you'll see it.
Thanks to Scott Egge
The Michael Bolton album was released in the U.S. I believe it was released in late 84 or early 85 under the same title, Everybody's Crazy. It was a big AOR hit in the mid 80's.
Thanks to Tytam92
In the band, in the twist and shout sequence, the bass player and the drummer are actually the founding members of a country group "Highway 101",which had quite a few hits in the late 80's.
Thanks to Brad Duren
Alice Cooper wrote a song for the "Back to School" soundtrack, but it was not included in the film. The song, titled "The Great American Success Story" is on his 1986 MCA album "Constrictor."
Thanks to Anonymous
One of two movies released in 1986 to feature the song "Twist and Shout". The other movie was Ferris Bueller's Day Off (1986), which came out the same week as this movie.

Back To School featured the following pieces of instrumental music:

Danny Elfman, who scored the film, also appeared in the movie with his band Oingo Boingo performing "Dead Man's Party" during the party scene. This track can be had on their "Dead Man's Party" album. [Thanks to Meaghan Ross]Update Us

Thanks to Amy S.
Danny Elfman also headed the rock group Oingo Boingo, which is why they made an appearance. The lead guitarist of the band, Steve Bartek, is also a composer and has orchestrated most of Elfman's films to date.
Rewind Archive
Danny Elfman scored the film. Some of his other 80's credits includes "Pee-Wee's Big Adventure" (1985), "Fast Times at Ridgemont High" (1986), "Texas Chainsaw Massacre Part 2" (1986), "Beetlejuice" (1988), "Midnight Run" (1989), "Batman" (1989) and he was the man that scored the infamous main theme for The Simpsons (1989) TV series.

Jump To: The Juicy Trivia!
Or use the menu to navigate
1986 MGM/UA
1999-2020 fast-rewind.com
V4_27 Powered by Rewind C21 CMS
Please Share The 8s
Support this spam free and non-commercial site
Copy
Thank you for sharing us!