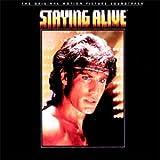 A staple of everyone's collection. Smart pop from the Bee Gees and Frank Stallone.

Sly's sibling had major success with the title track 'Far From Over' being nominated by the Academy for 'best song' and reaching no.1 on the charts. As a whole, it was also nominated for a Grammy and a Golden Globe for 'Best soundtrack'.

Probably expecting to sell twenty million albums like SNF, it is so readily available that citizens in most major cities are issued a copy fortnightly.Update Us

Jump To: The Juicy Trivia!
Or use the menu to navigate
1983 Paramount Pictures
1999-2020 fast-rewind.com
V4_27 Powered by Rewind C21 CMS
Please Share The 8s
Support this spam free and non-commercial site
Copy
Thank you for sharing us!