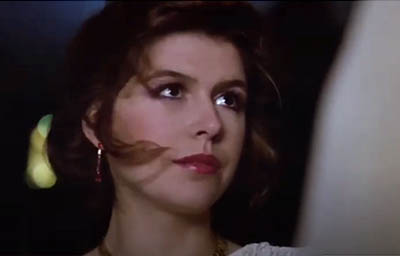 Rewind Archive
Semi autobiographical of Stallone's poor days as a struggling writer/actor in New York, Travolta is seen showering with clothes on as Stallone did when he couldn't afford to wash them at a launderette.
Thanks to John Edward Kilduff
John Travolta wasn't the only one puzzled by Sly's idea for "Satan's Alley". On VH1's "I Love The 80s Strikes Back", Sly's brother Frank Stallone recalled seeing copies of books with devils in them and "wondered what it had to do with 'Saturday Night Fever'". Finola Hughes was confused as well and she "was in it for six weeks!".
Thanks to politeintruder
The studio's rationale for Stallone directing was that he was great with sequels and franchises, having just come off of Rocky 3 which of course was a huge hit.

Shucks.. We don't know of any cut scenes from "Staying Alive". Can you help? Please add one for others to enjoy. It's quick & easy
Next Section: Alternate Versions

Aw, man.. We don't know of any alternate versions of "Staying Alive". If you know better, please add one for others to enjoy. It's quick & easy
Jump To: Filming Locations
Or use the menu to navigate
1983 Paramount Pictures
1999-2020 fast-rewind.com
V4_27 Powered by Rewind C21 CMS
Please Share The 8s
Support this spam free and non-commercial site
Copy
Thank you for sharing us!