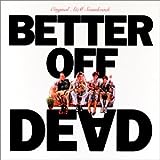 An assortment of songs performed by various artists including several by Rupert Hine.Update Us

Also - it's not "Just a Gigolo" that is on the soundtrack, it's "Everybody Wants Some" by Van Halen. This actually makes sense, since it's the motto off the burger joint he's fantasizing in...

Better Off Dead featured the following pieces of instrumental music:

Jump To: The Juicy Trivia!
Or use the menu to navigate
1985 20th Century Fox
1999-2020 fast-rewind.com
V4_27 Powered by Rewind C21 CMS
Please Share The 8s
Support this spam free and non-commercial site
Copy
Thank you for sharing us!