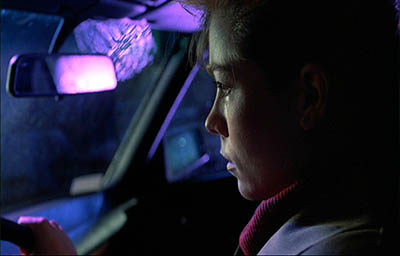 Not alone in the neon night

Rewind Archive
The script was penned by one of Hollywood's most successful writers, Ronald Bass.

Born March 26, 1942, he is thought to be among the most highly paid writers in Hollywood. He is often nicknamed the "King of the Pitches".

After success as a novelist, Black Widow was only his second movie script.

In 1988, he won the Academy Award for Best Original Screenplay for "Rain Man"

Shucks.. We don't know of any cut scenes from "Black Widow". Can you help? Please add one for others to enjoy. It's quick & easy
Next Section: Alternate Versions

The following versions of Black Widow are apparently real. If you disagree or have additional info, please update us.

Thanks to Helen
I just saw an alternate ending of the film! Theresa Russell goes to jail, Deborah Winger walks out of the building, that's all. The other times I've seen the movie it has ended with (I think) Deborah Winger sitting on a tropical beach having a drink, wearing a big sunhat...

BUT, Cosmo kindly wrote in to say "I think you are confusing the alternate ending of this movie with Body Heat. In that movie's ending scene, Kathleen Turner is lying on a beach, with a large hat, sunglasses and being served a drink."

Add another alternate version...
Jump To: Filming Locations
Or use the menu to navigate
1987 20th Century Fox
1999-2020 fast-rewind.com
V4_27 Powered by Rewind C21 CMS
Please Share The 8s
Support this spam free and non-commercial site
Copy
Thank you for sharing us!