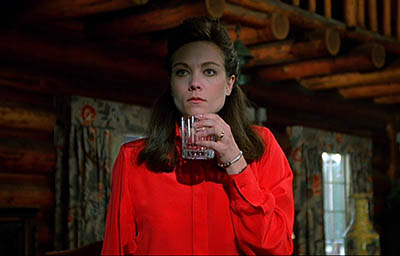 Theresa Russell is the face of seductive evil

Rewind Archive
Look for David Mamet playing a game of poker with Winger in one scene.
Thanks to Christine
Terry O'Quinn plays Jessica's boss Bruce. He also played John Locke on ABC's hit show "Lost".
Editor Nick
Two actors seen here are both also featured in "The Karate Kid Part II" the year before; also filmed in Hawaii. The detective (Danny Kamekona) was, of course, Sato and Paul's butler, Tran (Arsenio 'Sonny' Trinidad) was Ichiro.
Rewind Archive
Russell's measurements are 34C - 24 - 35. No wonder the guys in this movie like her so much!

But, nothing bogus that we know yet for "Black Widow".
Next: Behind The Scenes
Or use the menu to navigate
1987 20th Century Fox
1999-2020 fast-rewind.com
V4_27 Powered by Rewind C21 CMS
Please Share The 8s
Support this spam free and non-commercial site
Copy
Thank you for sharing us!