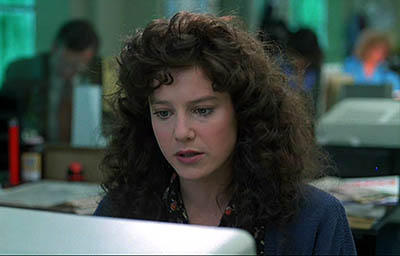 Editor Nick
The script was surely based on the fascinating real life story of Sandra Bridewell, a Dallas society woman whose husbands kept dying.

She was even openly labelled by the Dallas press as "The Black Widow" in 1985...

Three times she married successful men, and all three times her husbands died... And the FBI did investigate thoroughly in the early 80s.

Her first husband, David Stegall, a young, talented dentist, shot himself to death in 1975. Her second husband, a popular hotelier and investor who conceived the luxurious Mansion Hotel on Turtle Creek, died of cancer in 1982. Her third husband, Alan Rehrig, a former college basketball star in Oklahoma who had come to Dallas to hit it rich in real estate, was found murdered in December 1985.

Ironically, it would take until 2008 in real life to bring the real Black Widow to any form of justice.

She's kind of like a chameleon, changes colors and changes shapes according to whatever the situation is, Det. Marty Folding of the Brunswick County Sheriff's Office, who is leading the investigation, told FOXNews.com in 2007. Personally, I'm shocked. It's like something that reads out of a fiction book.

Although she, in a plea bargain, only pled guilty to charges of one count of identity theft in return for a sentence of two years in prison, two years of supervision and a $250,000 fine. In return, four other charges were dropped.

Blonde... The word conjures up so many associations. Beauty... sex... blonde moments... the unattainable... danger... death...

"WHOA! Hold the phone! Did you say death?"

Do I stutter? There's always been an element of danger among the concept of the blonde woman. Is there an excitement specifically associated with her? Most definitely. Within that, there's also the sense that you're walking into something you may not get out of.

Catharine Petersen (Russell) is that dangerous blonde. Her eyes shoot like jagged ice into the soul of many a rich man. Her curves are dangerous in more ways than one. She has millions of dollars under her, but there's a violent need for more. She poisons her rich men by spiking their brandy and their toothpaste. An operator par-excellence, she runs all over America, gaining cash while her lovers drop like flies.

Alex Barnes (Winger), by comparison, is stuffy and business-minded. Her business is being a Fed and she's developed a major interest in Catharine. Tracking down articles and finding pictures of her, she's managed to discover Catharine in her many guises. The uptight socialite... The down-home Texas girl... The bookworm benefactor... A different girl for every guy. Tracking Catherine to a tropical isle, the two meet under different guises and fall for the same man. Who will come out on top?

This movie is one of the most sensual thrillers of the 80s and it has a very interesting theme. We've all had to deal with at least one girlfriend/boyfriend who kept one or two people on the side, but have we ever stopped to think about their dark sides? Oh, sure, she has a great figure or he has a dazzling smile, but they said that true beauty is on the inside. It's confusing, though; how could somebody be so attractive yet so brutal at the same time?

I think that the looks of the main characters play a part in this theme. As Catharine, Russell is the epitome of brutal sexiness. Her delicate features and near-ivory skin catch you like a glove grabs a baseball. The disguises she puts on mask her soul even further. Her sunglasses hide the danger and eroticism in her emerald eyes... The wigs and hats on her head keep you from imagining what thoughts lay dormant within her brain. The way she kills her prey is quiet but disturbing nevertheless. The needle and liquid are kept secret and that's very frightening. Everything about Catharine is an enigma.

As Alex, Winger has a totally different style of mind and face. In many of her 80s roles, she was portrayed as somewhat of a very forward sexpot. In here, though, we see her as a rather inhibited and frumpy woman. You can see that her only excitement comes from reading of Catharine's path of death. I wonder if there might be an underlying layer to Alex's pursuit of Catharine. As a Fed, Alex seems to have taken on a sense of vigilantism in her trek to nail down Catharine. At the same time, there's also a Sapphic sense to her quest. Catharine seems to represent the dark side of life that fascinates some of the people in Alex's line of work. The Sapphic sense I speak of is probably best represented by a scene near the end of the movie. In her quest to take down Catharine, Alex has assumed an alias herself while Catharine has chosen yet another one. When Catharine is going to get married, she catches on to what Alex is doing and then gives her a very forceful kiss. There's an eroticism and a menace to that scene that seems to sum up the whole movie.

There's a dark side within everybody, but somehow we can hide it. The question is, how good can we do that?

This is a scalding thriller. With a sexy blonde villain, it seems to pre-date "Basic Instinct" by half-a-decade. I would have to say that Theresa Russell is far sexier than Sharon Stone, though. Russell is another underrated 80s beauty with far better acting skills. I'm surprised that she hasn't gone on to bigger things. If you want to see a sexy talent at her finest, I recommend this movie to you.

Debra Winger is able to keep it under wraps, but at the same time has a quiet sensuality about her. You can see a fascination on her face with the dark side of humanity. When Alex starts hanging around with Catharine, you can sense Winger's feelings of excitement. She's within range of her prey but she wants to wait until the time is right. The twist ending will nail you.

Rafelson's direction is quite good. He's a definite people person, and being as this movie isn't a hack-and-slash fest, he gets what he wants from his performers. He gets their passion and their mystery, as evinced from Ronald Bass' script. How he could go from a stunning thriller like this into a movie like "Rain Man" is rather shocking.

This is another underrated 80s thriller. I'm surprised that people don't really speak of this movie. It deserves all the attention it can get.

The performances and the script are great.

Some guys may think the srcipt concentrates too much on the women.

Jump To: Music & Soundtrack Vibes
Or use the menu to navigate
1987 20th Century Fox
1999-2020 fast-rewind.com
V4_27 Powered by Rewind C21 CMS
Please Share The 8s
Support this spam free and non-commercial site
Copy
Thank you for sharing us!