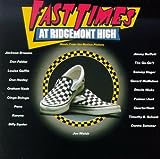 The soundtrack was thankfully re-released on CD in 1995.Update Us

Thanks to Matthew Smith
One of only 5 films to feature a licensed song from Led Zeppelin.
Thanks to Jonathan King
Well, this song wasn't in the movie, but was created because of the movie!
It's a song by a band called (Fenix Tx) named 'Phoebe Cates', a punk rock/alternative style song. The song was featured on the 'American Pie 2' Soundtrack. I'm guessing they wrote it hoping to someday be able to meet Phoebe.
Thanks to Invisigoth
I noticed on the soundtrack that 2 of the most memorable songs aren't listed but on the dvd they play the Go Go's 'We got the beat' and Tom Petty's 'American Girl'.
Thanks to Squirrel
When Mike Damone tells Mark Ratner what to do to get Stacy, he says... "When it comes to makin' out, play side 1 of Led Zeppelin 4", The song that's on in the car is "Kashmir" which is on the Led Zeppelin album "Physical Graffitti", NOT Led Zeppelin "4" ! On the DVD commentary, writer Cameron Crowe explains that they were unable to license a track from LZ4 but were offered Kashmir instead. They knew the problem that caused with the script but did it on purpose. Crowe added that this was the most common 'mistake' that people point out to him.
Thanks to TKO
Another song not featured on the Original Soundtrack is Moving in Stereo by The Cars. It can be found on their self-titled debut album. The song was used during Brads (Judge Reinhold) now famous pool scene fantasy, in which Linda (Phoebe Cates) removes her bikini top when walking up to him.
Thanks to Kurt
There was a song in the scene near the end of the movie when Mark Ratner is coming out the movie theater and he looks across the mall and sees Stacy. The song was NOT "So Much In Love" by Timothy B. Schmidt. It was a DIFFERENT song! Maybe is was just in the TV version that I saw in the 1980's. It was a similar sounding song, but it was DEFINITELY NOT "So Much In Love" The soundtrack/DVD all have "So Much In Love" and that was not the song I remember! Does anyone know/remember what song this was?? It went: "As we walk hand in hand through..." I can't remember the rest of it.

UPDATE: An anonymous visitor comments: "'So Much in Love' by the Tymes may be the version you remember."

UPDATE: Another anonymous visitor comments: I have been researching this and actually saw the movie with the song you mention which was new for me.

As we walk hand in hand, through our own enchanted land,
were reminded of these golden memories
Of those soft summer nights, underneath the corner light,
while we listen to our favorite melodies...
Just a sweet love song, playing all night long, playing soft and low, on the radio...

...And then it fades. Good luck

UPDATE: Dennis kindly adds: I have actually had the audio track of this film on cassette since 1982-83. I recently matched the audio with this song and the video for the film. I've posted the clip on YouTube. I still don't know the artist or track name. Here is the link.
Thanks to fabrizio foglino
During the party ad the end of the movie the group plays the Eagles song "Life in the fast lane". Irving Azoff, a film producer was the manager of the group and Crowe a friend of them, so in the soundtrack we can hear new songs from Tim Schmit, Joe Walsh, Don Henley and Don Felder
Thanks to Steve
During the party at the end of the movie Spicoli jumps up on stage and sings the 'Sam The Sham and the Pharaohs' song 'Wooly Bully'. "Hey dude I know that song!"

Jump To: The Juicy Trivia!
Or use the menu to select another option
1982 Universal Pictures
1999-2018 fast-rewind.com
V4.0b Powered by Rewind C21 CMS
Please Share The 80s Lve!
Support this spam free and non-commercial site
Copy
Thank you for sharing us!