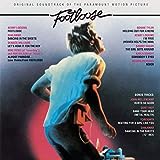 The soundtrack has been described as the one that 'defines the 80's'. It includes the massive hit "Let's Hear It For The Boy" and has always been readily available on CD.

Rewind Archive
Footloose was one of the first movies to utilise the power of MTV to sell the motion picture through pop videos of the songs, released weeks before the movie came out. This is now standard practise but at the time was a significant gamble. Paramount would repeat the trick exactly a few years later with the release of Top Gun
Rewind Archive
Kenny Loggins & Dean Pitchford were nominated for the Oscar & Golden Globe for Best Music, Song for the title song. So was Tom Snow for "Let's Hear it for the Boy."
Editor Nick
Deniece Williams apparently recorded the vocals for "Lets Hear It For The Boy" in only 20 minutes... late at night... after a long flight from LA to New York!

She wasn't coming to it completely cold, having previously already recorded a version that songwriter Dean Pitchford thought sounded too young and girlish, but its still an impressive feat of performance, I think you'll agree!
Rewind Archive
In the sequence in which Ren is teaching Willard how to dance, they're actually dancing and singing along to "Somebody's Eyes." "Let's Hear it for the Boy" was added in post-production after the director Herbert Ross felt that "Somebody's Eyes" was too slow for the scene.

Jump To: The Juicy Trivia!
Or use the menu to navigate
1984 Paramount Pictures
1999-2020 fast-rewind.com
V4_27 Powered by Rewind C21 CMS
Please Share The 8s
Support this spam free and non-commercial site
Copy
Thank you for sharing us!