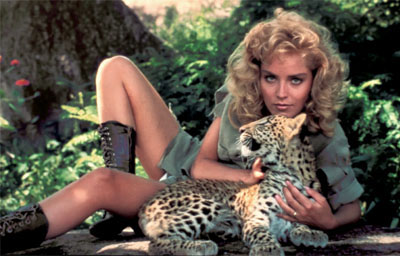 They are not the only ones "going for the gold" however. A turkish slavemerchant (John Rhys Davies) and a German Colonel (Herbert Lom) are on their trail. And triying to do away with our hero and his lady companion, as they trek across the dark continent, escaping narrow death time and again, on the way to the lost mines.

This is a an old style adventure movie with all that goes with it. cannibals, crocodiles, quicksand, an airplane dogfight and so on.

If your an 80´s movie fan, you've most likely come across a Cannon film or two before. And are probably also vaguely aware of their M.O. back in the day, taking over waning franchises (Death Wish, Superman etc), exploting current trends (Breakin´, Rappin, Lambada etc) and trying to cash in on the major blockbusters of the time.

This one was a rather obvious attempt at the latter. It is clear that Golan and Globus were trying to get their piece of the adventure movie pie, started by Spielberg and Lucas with the Indiana Jones films. And in all fairness, this movie crosses the fine line between homage and flat out rip off by a mile or two.

Let's examine shall we? Hero with a hat and signature weapons... check. German army villains (although of the pre world war 1 variety)... check. Marketplace abduction... check. Dragging on chain after vehicle... check. Grandious sweeping theme song, everytime our hero springs into action... check. John Rhys Davies... check. And I could do this all day...

I mean the wholesale borrowing from Raiders of the lost ark and Temple of doom is hard to miss here. But as with all low to medium budget exploitation cinema (which I think this qualifies as).

You just have to put everything aside but the popcorn, and enjoy the movie for what it is. And what it is, when cutting it some slack, is a pretty enjoyable 80´s action adventure flick. With a decent cast, namely Chamberlain and Rhys Davies. Some fun and exiting action set pieces, like the cannibals trying to cook the two leads in a huge pot on a fire and Quatermain being lowered head first into a croc pit. and the beautiful Zimbabwe locations.

This movie is based on the old novel by H. Rider Haggard. But aside from the name of the movie and main character, the two have next to nothing in common. Although I found the stereotypical portrayals of the native africans and other non english characters very much akin to Haggards empirialistic views. One could argue that the movie is somewhat racially insensitive. But if your concerned with political correctness, you probably shouldn't be watching 80´s movies. Let alone Cannon films...

With all that said, I enjoy this movie from time to time. It can never measure up to the Indy flicks, or even some of the other 80´s adventure movies like Romancing the Stone, Jewel of the Nile or Big trouble in little China.

But it was a valiant attempt by Cannon.

And for those that haven't seen it... give it a whirl. You might enjoy it.

Jump To: Music & Soundtrack Vibes
Or use the menu to navigate
1985 Cannon Films
1999-2020 fast-rewind.com
V4_27 Powered by Rewind C21 CMS
Please Share The 8s
Support this spam free and non-commercial site
Copy
Thank you for sharing us!