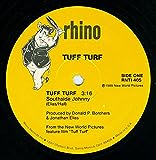 The original VHS copy had a different version of 'Breakin' the Rules' than the vinyl soundtrack and later DVD. It sounded like it was done by Southside Johnny, rather than Lene Lovich. I thought it was a much better version.Update Us

Jump To: The Juicy Trivia!
Or use the menu to navigate
1985 New World Pictures
1999-2020 fast-rewind.com
V4_27 Powered by Rewind C21 CMS
Please Share The 8s
Support this spam free and non-commercial site
Copy
Thank you for sharing us!