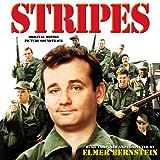 Thanks to Samuel
As a result of this movie, the song "Do Wah Diddy Diddy" has become a popular cadence in the US military.

Jump To: The Juicy Trivia!
Or use the menu to select another option
1981 Columbia Pictures
1999-2018 fast-rewind.com
V4.0b Powered by Rewind C21 CMS
Please Share The 80s Lve!
Support this spam free and non-commercial site
Copy
Thank you for sharing us!