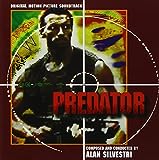 Alan Silvestri's excellent militaristic score underpins and enhances the fantastic combat scenes and greatly enhances the tension whilst the group are stalked by the Predator. Despite emerging from the 80s as one of the biggest blockbusters of the decade, Predator never received a soundtrack release.

Sixteen years later, Varèse Sarabandes release of Alan Silvestris score for Twentieth Century Foxs Predator was a Limited Collectors Edition of 3000 copies only. Re-released in 2014 for us all to enjoy, thank goodness!Update Us

Jump To: The Juicy Trivia!
Or use the menu to select another option
1987 20th Century Fox
1999-2018 fast-rewind.com
V4.0b Powered by Rewind C21 CMS
Please Share The 80s Lve!
Support this spam free and non-commercial site
Copy
Thank you for sharing us!