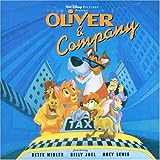 The CD is full of 80's music superstars like Billie Joel,Huey Lewis,Ruth Pointer,and Bette Midler. It is, in my opinion, one of the most enjoyable Disney soundtracks because the songs are more targeted towards typical radio-aired music, rather than dramatic Broadway.Update Us

The main score was written by J.A.C. Redford and teh orchestration was by Thomas Pasatieri.Update Us

Jump To: The Juicy Trivia!
Or use the menu to navigate
1988 Walt Disney
1999-2020 fast-rewind.com
V4_27 Powered by Rewind C21 CMS
Please Share The 8s
Support this spam free and non-commercial site
Copy
Thank you for sharing us!