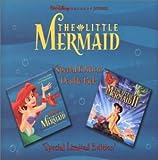 The songs were written by Howard Ashman and Alan Menken.

The music on this soundtrack can be called so many things. Beautiful, Colorful, Bright, Poignant, Catchy, Touching, Humorous, Adorable, Memorable, Graceful, Romantic... Classic.

The songs range from English folk to French Cabaret to lively Caribbean to show stopping Broadway.Update Us

Thanks to Nick Napolitano
"Under The Sea" won the Academy Award for Best Song.
Rewind Archive
Originally it had been planned that Sebastian have a British accent, but the movie's songwriters were looking for something a bit more upbeat and foot-tapping for the music and so it was decided to give Sebastian's two numbers West Indian rhythms, sung and voiced by the amazing Samuel E. Wright.

The Little Mermaid featured the following pieces of instrumental music:

The original score was by Alan Menken and the orchestration was done by Thomas pasatieri.Update Us

Jump To: The Juicy Trivia!
Or use the menu to navigate
1989 Walt Disney Studios
1999-2020 fast-rewind.com
V4_27 Powered by Rewind C21 CMS
Please Share The 8s
Support this spam free and non-commercial site
Copy
Thank you for sharing us!