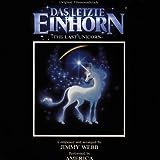 This soundtrack is so beautiful and a very rare, must have 80's collectible. Most of the tracks were performed by the classic 70's folk rock band America. However,Jeff Bridges and Mia Farrow also sing on this CD, where else can you hear that?Update Us

Rewind Archive
Many of the songs in this film were sung by the band America, most famous for songs like "A Horse With No Name" and "You Can Do Magic".

The Last Unicorn featured the following pieces of instrumental music:

Rewind Archive
Jules Bass said, "The Last Unicorn has a score by Jimmy Webb. I'd been intrigued with his work since 'Up Up and Away'. When we asked him, it was a long shot, but he read the book and said, 'I'll do it'. Eight weeks later, Arthur and I went to his house in California and he sat down at the piano and played the score from one end to the other. We were mesmerized. I said, 'Sensational'. He said, 'What do you mean? Don't you want to talk about it?' I said, 'No let's just go ahead'."

Jump To: The Juicy Trivia!
Or use the menu to navigate
1982 ITC Entertainment
1999-2020 fast-rewind.com
V4_27 Powered by Rewind C21 CMS
Please Share The 8s
Support this spam free and non-commercial site
Copy
Thank you for sharing us!