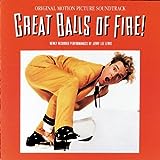 Includes, of course, many tracks by Lewis himself as well as a few by other artists.Update Us

Thanks to P. Deckelman
Jerry Lee later recorded his own version of "Big-Legged Woman" -- the song that opens the movie in the scene where he and Jimmy Swaggart sneak over to Haney's as small boys to see what's going on -- and Jimmy runs away while Jerry Lee sticks around to dig the scene.

Jump To: The Juicy Trivia!
Or use the menu to navigate
1989 Orion Pictures
1999-2020 fast-rewind.com
V4_27 Powered by Rewind C21 CMS
Please Share The 8s
Support this spam free and non-commercial site
Copy
Thank you for sharing us!