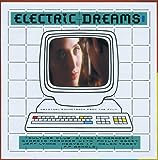 Two of the most memorable music tracks in this film were written and performed by Jeff Lynne. Although Lynne is most recognized as the founder and sound of the band E.L.O., in fact Jeff has been one of the most prolific song and soundtrack writers, not to mention producer.

Jeff Lynne was the man behind Roy Orbison's big comeback, also the major contributor to The Traveling Wilbury's music and sound. Jeff Lynne was also the person chosen to assist the remaining Beatles in the production of the Songs "Real Love" and "Free as a Bird", being as John Lennon was no longer with us.

Although Giorgio Moroder has the major credits for the music in this film, Jeff Lynne gave us the upbeat, danceable and memorable tracks. In fact, "Let It Run", was originally written in 1980 and was used in part in the movie musical "Xanadu". It can be heard as a background track in the movie, but was not listed in any of the credits for the film.

The movie uses many other fabulous artists songs, including two from Culture Club, "Love Is Love", which is one of the best songs of 1984 and "The Dream", which is just "like Alice in Wonderland".

Also, Culture Club's some-time backing singer Helen Terry gets her own opportunity to shine under the production of Georgio Moroder, with "Now Your Mine". There are also some fine instrumental tracks on this album from Moroder, "The Chase" and "Madeline's Theme".

Another classic that Moroder produced is the worldwide #1 single "Together In Electric Dreams" sung by the Human League's Phil Oakey.

This album has been out of print more than 10 years in the U.S. Fortunately you can order it as an European Imported CD from our search device.Update Us

Thanks to Jon A. Gibson
If you play "Video" from the soundtrack LP at 45rpm, it sounds EXACTLY like Cyndi Lauper. Analog or digital, play with it & find out for yourself!
Rewind Archive
The movie was made and financed as an experiment by Virgin. It featured music from the pick of the Virgin record label. It surely was an early example of synegistic marketing of movies via their soundtracks. It has often been said that Virgin were burned financially on the film, which despite massive exposure from the music, didn't make as much money as was expected at the box office. The truth is that, it did show a reasonable profit and it was, in fact, later films from Virgin which made losses. Sadly, true though, is the fact that it is now one of the few titles of merit which have disappeared almost entirely without trace.
Editor Nick
Phil Oakey has said that he only sang "Together in Electric Dreams" once during recording. He thought it was just an initial run-through but afterwards Giorgio Moroder apparently said that he was happy and the job was done!
Editor Nick
Giorgio Moroder has stated that the choice of Phil Oakey to sing the title song was not his, but the producers. In fact, he said that is normally the case and he "just has to make it work".

He did add that Phil was a nice guy and great to work with.

In the scene where Madeline is practising in her apartment and Edgar starts jamming with her, the song they play ('Mad Minuet') is based on Bach's 'Minuet in G Major'Update Us

Jump To: The Juicy Trivia!
Or use the menu to navigate
1984 MGM-UA
1999-2020 fast-rewind.com
V4_27 Powered by Rewind C21 CMS
Please Share The 8s
Support this spam free and non-commercial site
Copy
Thank you for sharing us!