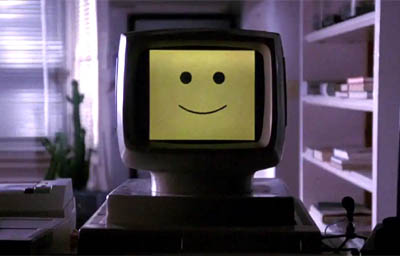 This is no ordinary computer.... Meet Edgar

Cast/Crew Rusty Lemorande
We were thrilled when Rusty Lemorande, the Writer/Producer of the film wrote in to say he "wrote the film inspired by/based on my first year in Los Angeles when I was very lonely and only had an Apple computer to occupy my evenings.

I finished the script while making Yentl in London.

Rusty also let us in on the fact that "the dog in the film was my dog, Winston (an English dog)".

Miles Harding (von Dohlen) is a bit of a nerd, an architect who is trying to invent "The Earthquake-Proof Brick".

Well, almost. He's not great with computers. He's not really great at life, as it happens. So when one of his colleagues convinces him he needs 'organizing', he buys himself a computer, connects it to all the gadgets in his house, and like all good computer geeks, sets about running his entire house from the comfort of his swivel chair.

All goes well, until he accidentally overloads the computer with data from his office mainframe. Trying to put out the fire, he spills champagne over the keyboard. There's some violent interaction between bubbles and circuitry, and, when he switches the system back after drying it out, Edgar (the computer, voiced by Cort) comes strangely to life.

After a few initial doubts, Miles is fine with this and indeed comes to like it. Until cello player Madeline (Madsen) moves into the apartment upstairs.

Things begin to get out of hand when Miles falls in love with Madeline. Edgar, left alone in the apartment during the work day soon follows suit and seduces Madeline by accompanying her cello practice. Miles gets Edgar to write a love song for Madeline, in which Edgar pours out his silicon heart. In surely the strangest love triangle ever made, Madeline believes that her wonderful musical muse is Miles, whilst we all know better. A jealous clash is brewing.

How can Miles win Madeline from a competitor she doesn't know is there? What will Edgar do next to try to get the edge over Miles?

If you haven't seen the movie, then all this probably sounds rather pitiful. And it would be, were it not for fine performances from the under-rated Lenny von Dohlen and Virginia Madsen. The emphasis here is definitely on "heart" and style and this magical urban fairytale is laced with some of the best pop music ever written for a movie. Its also very well photographed and a bit surreal in places. A bit like a long pop video, which I'm sure is what mean-spirited critics would say about it.

There are also many little details that the scriptwriters used in the movie, which pre-dates the Personal Computer era, but cleverly predicts the hassles man would have with his silicon friends. An example is when Miles mis-types his name as "moles" during an initial setup screen and Edgar, the computer, refers to him by that name for the rest of the movie! (not much has changed since, in computer setup software, it would seem!).

This movie has not been available in the US for years, but to buy it, you can use our search device.

Although we're still waiting for a USA DVD release, Electric Dreams was released on DVD (R2) in the UK in 2009 and blu-ray in 2017.

I remember seeing this movie in London when it first came out, when computers were still unusual and fascinatingly, big clunky boxes with built in keyboards, and when Bill Gates was still just some guy with glasses in Connecticut or somewhere.

..Well, ok, Bill was actually already in there, but he wasn't the household name that he is today.

The Apple II, Commodore 64 and TRS80 were still being sold through specialist outlets, running with their own versions of DOS and memory measured in a few K, not MB, let alone GB.

This movie was good on a several levels, the love story was well crafted, the soundtrack is superb (Giorgio Moroder at his best) and Virginia Madsen looked marvellous (very much like a friend of mine years later - when I first met her, she reminded me of this movie immediately). The technology obviously dates the movie, but the ideas on how to expand the use of computers are still valid today.

If you can, catch the movie whenever it's on.

It looks a little dated now, but the IT hardware has gained some kitsch value over the years.

Jump To: Music & Soundtrack Vibes
Or use the menu to navigate
1984 MGM-UA
1999-2020 fast-rewind.com
V4_27 Powered by Rewind C21 CMS
Please Share The 8s
Support this spam free and non-commercial site
Copy
Thank you for sharing us!