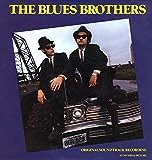 The Soundtrack for this movie is great. The entire movie is scattered with great songs from many fine artists, and unlike a lot of movie soundtracks, the songs are an integral part of the movie.Update Us

Thanks to Joliet Jake
"The Girl from Ipanema" is the music that is played in the elevator scene - a piece of music which is present in other John Landis films.

Jump To: The Juicy Trivia!
Or use the menu to navigate
1980 Universal Studios
1999-2020 fast-rewind.com
V4_27 Powered by Rewind C21 CMS
Please Share The 8s
Support this spam free and non-commercial site
Copy
Thank you for sharing us!