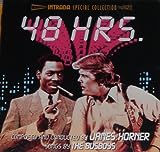 The unforgettable "Boys are Back in Town" by the Bus Boys is still stuck in everyone's head to this day as well as Murphy's version of The Police classic "Roxanne".Update Us

Thanks to Dave Crump
The band playing at Vroman's, The Bus Boys, also appear on the soundtrack for the 80's classic, "Ghostbusters" with the song "Cleaning Up the Town." The Bus Boys were also the band that used to open for Eddie Murphy in the early 80's when he was still doing stand-up comedy.

James Horner makes his sound jazzy yet dramatic and would later rehash this sound in Commando and Red Heat.Update Us

Jump To: The Juicy Trivia!
Or use the menu to navigate
1982 Paramount Pictures
1999-2020 fast-rewind.com
V4_27 Powered by Rewind C21 CMS
Please Share The 8s
Support this spam free and non-commercial site
Copy
Thank you for sharing us!