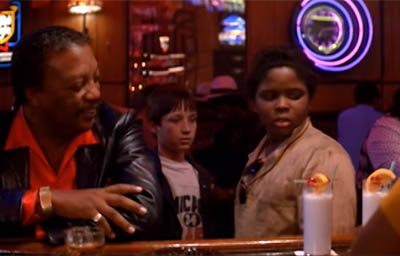 Rewind Archive
Paul Winfield who plays Johnny Red has appeared in many movies. You will most likely recognise him from Mars Attack as Gen. Casey.
Rewind Archive
Screenwriter Joe Eszterhas also penned "Flashdance, "Jagged Edge" and later, such 90's classics as "Basic Instinct".
Rewind Archive
Ricky Busker was nominated for Best young actor in a motion picture comedy in the Ninth Annual Youth in Film Awards 1986-1987. Incidentally, the winner was Patrick Dempsey for "Can't buy me love".
Thanks to Rafael Orduna
Darius McCrary is best known for playing Eddie Winslow on the ABC sitcom "Family Matters".

But, nothing bogus that we know yet for "Big Shots".
Next: Behind The Scenes
Or use the menu to navigate
1987 Lorimar
1999-2020 fast-rewind.com
V4_27 Powered by Rewind C21 CMS
Please Share The 8s
Support this spam free and non-commercial site
Copy
Thank you for sharing us!