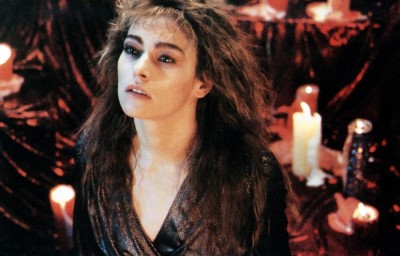 More Trivia from The Kiss

We first meet Amy Halloran, a teenager from a highly religious family, during her confirmation as a "Solidier of Christ" in a Catholic ceremony.

Amys mom is killed in a freak auto wreck whilst going to meet her absent sister Felice, a top fashion model. Highly attractive aunt Felice later shows up at the gravesite sporting an unusual foreign accent but Amys dad asks Felice to stay with them.

At first Amy likes Felice because she seems cool and hip. Shortly after Amy starts to realize there is something weird about Felice.

No one believes Amy. Her dad and close friend and neighbor both think she just misses her mom. Amy and her dad start to fight over Felice's presence. Amys friends begin to get injured. There is a secret about Felice. She has a parasite living inside her that is looking for a new host.

She can only pass it on through a... Kiss.

There are a few things that work for this film. I liked the cast. Joanna Pacula is sexy as Felice. She manipulates the dad using sexuality and by giving him a job. The usage of erotica is much more adult orientated than normal for a teen movie. I especially liked Meredith Salenger. She was believable as the moody teenager who doesnt trust Felice. Mimi Kuzyk was great as the divorced neighbor that Amy would rather hang out with. The music works well in setting the mood. The whole "try to beat the clock" tension at the end worked well. I loved how the sun shined on the pool. The viewer couldnt help but thinking the pool would play a big part in the film... And it does!

Then there are some things that dont work so well. Felice has an evil cat to help her do her dirty work. Well, that just has to be the worst looking cat puppet I ever saw! The cat is vicious and sort of resembles one of those critters, but on acid. Another problem is how the director spends too much time focusing on objects and situations that appear to be portents of doom, then end up as just bluffs. The viewer is tricked in believing something suspenseful is going to happen and this happens a number of times. Sometimes you can have too much of a good thing.

Amys dad is likeable and does a good job with what he has to work with, but sometimes comes off as a bewildered sitcom dad.

There are also many inconsistencies. Like Amys friend Terry breaking into the aunts hotel room when he was never told where it was. Then theres the curse itself: When the curse was passed on in the prologue all it needed was a kiss, later it needs all kinds of mumbo jumbo rituals.

There is enough gore but it's well handled. Like any good director, Densham makes you believe that you saw more than you really did. One of the most memorable scenes is the classic escalator scene at the local mall. There is also a classic "I will be right back" scene. The script tries to be original with its death scenes and I think it largely succeeds.

This movie does have some mild nudity and lots of highly charged sexuality between the adults but its all to the aid of the plot.

Overall, its a likeable teen popcorn horror movie with some uniqueness. If you want to see something different then watch this film!

Overall, I enjoyed this film. It is a guilty pleasure for me. Movies don't get made like this anymore.

OK, so that cat puppet looked more like a critter than a cat. It was pretty cheesy. It was made by the makeup effects artist Chris Walas, who has provided work on films such as "Scanners" (1981) and "Gremlins" (1984).

Not everything gets explained in the film, which might frustrate some viewers.

The movie is 98 minutes long. I felt the pace was decent for this type of film.

Meredith salenger
Mimi Kuzyk. The ending, the pace, the music and Joanna Pacula.

The cat puppet. Some of the fashions the actors wore! Some of the dialogue didn't match the actions in the film.

Jump To: Music & Soundtrack Vibes
Or use the menu to navigate
1988 TriStar pictures
1999-2020 fast-rewind.com
V4_27 Powered by Rewind C21 CMS
Please Share The 8s
Support this spam free and non-commercial site
Copy
Thank you for sharing us!