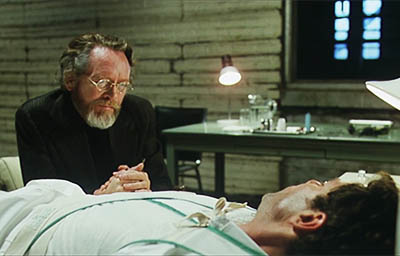 Rewind Archive
Director David Cronenberg had to start shooting, for various financial reasons, before he had even finished the script!

He often wrote the script between 4 a.m. and 7 a.m. each morning and at any spare moment during shooting."There was a time," Cronenberg said, "when no one knew what was going on. Times when everyone went to lunch and I wrote the scene that was coming up.

In the early 80's the home video boom was in full swing. One thing that helped fuel this boom is not often discussed but must have been a significant factor: 'video nasties' and the millions of teenagers worldwide who suddenly found that they had relatively easy access to them.

Looking back now, it must have been a match made in heaven. Extreme images of simulated gore coupled with an invention that allowed excited teenagers access to them when their parents were out.

Many of the most gory or terrifying movies passed into legend at high schools round the world, which brings us on to... "Scanners".

A moderate success when released theatrically, Scanners was a huge success on home video, due, almost entirely to the infamous 'exploding head' sequence that immediately passed into schoolyard legend. Millions of copies must have been hired for this reason alone and for many teens, the rest of the movie, a tense and relatively slow paced psychological thriller with only two sequences of real gore, must have come as a bit of a disappointment.

-At least this is my theory.

For "Scanners" is deserving of much more praise than the hundreds of mediocre reviews that seem to exist. It plays on one of our common personal fears, telepathy; as well as one of society's most common fears in the early 80's -That government and corporations are up to really scary things behind closed doors...

The story revolves around the concept of 'Scanners'. That there exists among us an imperceptible breed of telepathic humans able to control others...

We are introduced immediately to our unlikely hero. Cameron Vail (Steven Lack), is a homeless outcast who has the extraordinary 'gift' of hearing peoples thoughts. In the early scenes of the movie we are shown that, far from being every teenagers dream, it is a terrible affliction for Vail from which he has no respite or escape.

Seperately, we are also introduced to someone else who once had constant voices in his head, Darryl Revok (Michael Ironside at his best). Revok attends a seminar on telepathy and the phenomenon of 'scanning' and spectacularly overpowers the person who is giving simple demonstrations. This is where the poor guy's head explodes (played by Louie Del Grande).

Meanwhile, Vail is captured by Dr. Paul Ruth (Patrick McGoohan) who has spent a lifetime researching scanners. Dr Ruth works for ConSec, a powerful corporation that specializes in military and defense projects (what a suprise!).

Ruth gives Vail a new experimental wonder drug called 'Ephemerol' that will help him control the voices and he is subsequently trained to use his powers more effectively. ConSec needs him to deal with Revok, who as a previous subject has got out of control and is now seeking to create his own group of 'super scanners' through injecting Pregnant women with the same drug, Ephemerol.

What follows is a brilliantly effective and highly unusual cross between disturbing psychological thriller, conspiracy movie and low-brow gore-fest.

It works though. Probably because it cleverly portrays things in a 'just believable' way. The mysterious and anonymous ConSec corporation, much like the one in Douglas Trumbull's "Brainstorm" seems believable. The filmmakers couldn't have chosen a better 'bad scanner' than Michael Ironside, who gives the performance of his career, complete with old black and white lab footage of his attempts to drill into his own head "to let the voices out". The unusual choice of the quirky British actor Partrick McGoohan (of "Prisoner" fame) for Dr Paul Ruth is also genius.

An unusual, dark, brooding horror/sci-fi/thriller from Cronenberg. A legendary cult classic that, for once, is actually better than the legend that surrounds it.

Jump To: Music & Soundtrack Vibes
Or use the menu to navigate
1981 MGM
1999-2020 fast-rewind.com
V4_27 Powered by Rewind C21 CMS
Please Share The 8s
Support this spam free and non-commercial site
Copy
Thank you for sharing us!