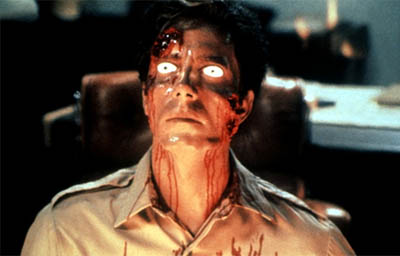 
The film was shot in Toronto, Canada with scenes shot on Yonge St off Elm St near Dundas St (main intersection).

Sam The Record Man's store can be clearly seen in the background of the scenes in the van and first opening scene with Peter Lack as a homeless person in the Food Court at the Yonge & Bloor Center (located in the basement/Yonge and Bloor Subway enterance of the shopping complex) just across the street from Yorkville. [Thanks to Julie]

The 'doctor's office was shot in Saint-Lambert, Quebec, Canada. Can anyone provide an address?

The Future Electronique building in Vaudreuil-Dorion, West of Montreal was used for many of the scenes. It's still there. There have been rumours of turning it into a regional hospital for years. [Thanks to Nick]

User ephemerol-81 wrote in to say that they heard a rumour that some interior shots were filmed in Winnipeg. Can anyone confirm this?

The film was done in both Toronto AND Montreal. I had the pleasure of being an extra In Dec of 1979. The scene where Vale gets inside the drug processing center is actually a water filtration plant located in Lasalle (now part of the city of Montreal). Usine de Filtration Charles-J. Des Baillets is its name in french. I was one of the guys in the white astronaut suits. Some of the scenes were filmed along the St Lawrence river,the Jacques Cartier bridge can be seen in the background. [Thanks to Ted]

If you know of a good link for Scanners locations, please let us know.

We are pleased to be able to bring you a sneak peek at what LX locations will be available for Scanners upon release:

Please Note: The status of some entries in this preview may be wrong because they are in-progress or need updating before release.
Jump To: Bungles & Goofs
Or use the menu to navigate
1981 MGM
1999-2020 fast-rewind.com
V4_27 Powered by Rewind C21 CMS
Please Share The 8s
Support this spam free and non-commercial site
Copy
Thank you for sharing us!