PG
AKA:
1984
“
She was the woman of his dreams... she had large dark eyes, a beautiful smile and a great pair of fins. 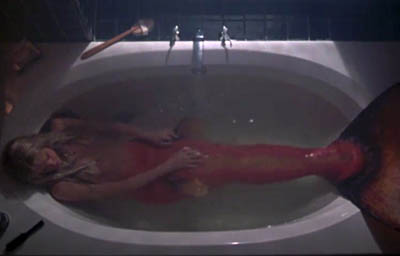 Rewind Archive
This was the first film released by Disney under the label of Touchstone Pictures, initially created for more mature audiences. It also has the first nude scene in a Disney movie.

Only in the 80s could you have a film about a mermaid who arrives naked in New York to track down a man she saved from drowning and fell in love with, in between flapping around in a bath trying to keep her enormous fishtale a secret.

Splash was the movie that made stars out of Tom Hanks, Darryl Hannah and John Candy, whilst at the same time promoting former Happy Days actor Ron Howard to Hollywood heavyweight director.

Allen (Hanks) and Freddie Bauer (Candy) are unlikely brothers, who run their own business. Candy is the fun loving brother whos ultimate ambition is to get a letter published in Penthouse, whilst Allen is a much more sincere, hardworking and all round good guy who has just been dumped by his girlfriend.

One day the young Allen, whilst on a boat trip from Cape Cod with his parents, stares pensively out to sea and for reasons that are not entirely clear, decides to jump in...

...Not being able to swim starts to sink and sees a beautiful young mermaid -just for a moment- prior to being rescued by the panicked adults who throw themselves into the sea after him.

Years later on a small boat, he accidentally falls in on the same stretch of water and after being knocked out trying to get back on the boat, is rescued by a gorgeous mermaid, who we are left to assume is the same one, now grown up into the lovely Darryl Hannah.

Gorgeous mermaid then finds his wallet and decides to take five days leave from the ocean to track Allen down and get to know him. So off she goes completely nude for a stroll through New York City in search of Allen.

She promptly gets arrested for nudity and the police call Allen as it is the only ID she has on her. He takes her back to his apartment and they begin to fall in love...

...However, a small spanner in the works of this glorious new romance is the fact that darling Madison turns back into a mermaid if she gets wet and regularly needs to roll out her fin and douse it down with water, cue lots of near misses and a wonderful scene in the bath with Allen outside the door. She also manages to master English in one afternoon spent watching television  eat your heart out Sesame Street!

Things take a turn for the worse when during one of her spells as a mermaid on land she is caught by the government, who haul her off to live in a tank in a laboratory where she is so broken hearted that she is on the brink of death when the ever resourceful Allen brothers break in disguised as Swedish scientists and risk all to save the fish of Allen's dreams.

A surprisingly good film for such a ludicrous proposition and well worth watching a couple of times to get all the bits you missed the first time around.

Its all massively improbable, but entertaining and fun nonetheless -due in no small part to Howard's wonderful fairy tale direction. He injects so much warmth and good hearted humor into the movie that you can't help but love it.

Much of this style was be seen again and again from Howard in the 80's with such equally implausable premises as "Cocoon".

Like ET, a heart warming story of innocent love blended with some fine comedy.

Lime many 80's fairy tales, its not for hard-bitten cynics!

Jump To: Music & Soundtrack Vibes
Or use the menu to navigate
1984 Touchstone Pictures
1999-2020 fast-rewind.com
V4_27 Powered by Rewind C21 CMS
Please Share The 8s
Support this spam free and non-commercial site
Copy
Thank you for sharing us!