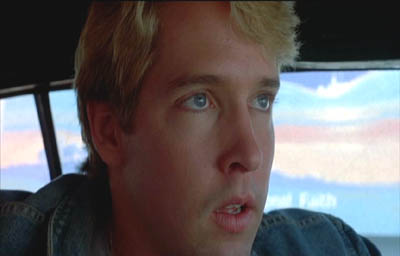 See Brad Pitt before they were famous!

Porsche obsessed Benjy Taylor (Sweeney) is an undercover cop, asked by 'legendary' Lieutenant, Bracey (played wonderfully by Quaid) to investigate "Technique Porsche", an independent Porsche dealer fronted by icy smooth Ted Varrick (Sheen), who it seems is making far too much money to be honest...

To get close to his man, Benjy goes to work for Technique Porsche. He then goes by the name Bill and quickly gets in Ted's good books through his knowledge of the cars -and especially, their security systems! Ted starts showing Bill a good time at up-scale clubs and parties, which is where he meets Ted's sister Ann...

By now, Bill and Ted are quite close and after a while, the reason for Ted's success is revealed. Ted steals Porsches, changes their color and identity and resells them at huge profit. Before long Ted and Bill are stealing Porsches nightly and driving them back to Ted's 'chop shop'.

Suprisingly, Ted comes from a wealthy family and so, apart from the obvious purpose of greed, much of Ted's motivation is the thrill of the crimes themselves... Until he gets the sinister attentions of rival car gangs who are none too pleased that Ted's mob is cleaning up the Porsche market.

The battles with these rivals becomes more embittered when Ted's shop manager (Bill Duke) is killed. What follows are stylish 80s fender-cam chases and neon club-lit murder, mayhem and action all the way...

With "No Man's Land" we've got a relatively unknown but suprisingly stylish movie, with all the classic ingredients of 80s greatness. A crusty, irritated Randy Quaid squares up against smooth but unhinged Sheen with wonderful iconic 80s character actors like M. Emmet Walsh and Bill Duke. To counterpoint this is the great performance by D.B. Sweeney, who should have been A-list but never quite seemed to get there...

Class actors in a well paced and stylishly photographed bit of 80s class. Should be better known than it is. Warmly recoomended.

Ending could be better.

Jump To: Music & Soundtrack Vibes
Or use the menu to navigate
1987 M.G.M
1999-2020 fast-rewind.com
V4_27 Powered by Rewind C21 CMS
Please Share The 8s
Support this spam free and non-commercial site
Copy
Thank you for sharing us!