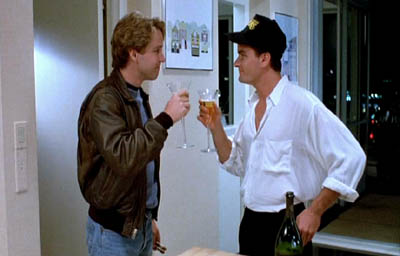 Rewind Archive
Charlie Sheen was injured when a squib hardened overnight and was detonated at the wrong time. He received lacerations to his face and was knocked unconscious. He received nine stitches and was deaf in one ear for four weeks.
Rewind Archive
Avi Nesher was originally going to direct, but was replaced just a few days before shooting began, leaving Peter Werner to pick up the pieces.

Shucks.. We don't know of any cut scenes from "No Man's Land". Can you help? Please add one for others to enjoy. It's quick & easy
Next Section: Alternate Versions

Aw, man.. We don't know of any alternate versions of "No Man's Land". If you know better, please add one for others to enjoy. It's quick & easy
Jump To: Filming Locations
Or use the menu to navigate
1987 M.G.M
1999-2020 fast-rewind.com
V4_27 Powered by Rewind C21 CMS
Please Share The 8s
Support this spam free and non-commercial site
Copy
Thank you for sharing us!