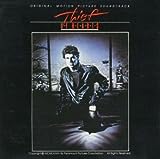 The songs themselves are great. The best one is the title track by Melissa Manchester. Her words (along with Giorgio Moroder's music) also manage to capture the movie perfectly. I recommend tracking down the extended version for a more imaginative experience.Update Us

Thanks to Anonymous
Darwun Hastings contributed TEAR ME UP, (a great haunting techno song). Darwun was married to David Palmer, the lead singer of STEELY DAN. She also did backgrounds for many well known artists during the 80s.

She has invented a patented hair product and solid rumors say she is about to be PUBLISHED AGAIN as an author this time!!!

She still has centerfold looks and an amazing voice!

Darwun herself wrote in to add: Thanks for the "props" on my current looks and voice. True I'm an inventor and do have new artistic works coming out, including a sizzling fiction piece.

Thief Of Hearts featured the following pieces of instrumental music:

As previously stated, from the opining shots of the Golden Gate bridge, Faltermeyer's score captured the movie's tones -and the era- perfectly.Update Us

Jump To: The Juicy Trivia!
Or use the menu to navigate
1984 Paramount Pictures
1999-2020 fast-rewind.com
V4_27 Powered by Rewind C21 CMS
Please Share The 8s
Support this spam free and non-commercial site
Copy
Thank you for sharing us!