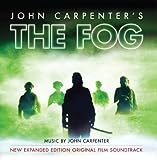 The soundtrack for this movie is perfect, with a blend of church classical and early 1960's doo-wop and rock. Especially appropriate is the use of Handel's "Halleujah Chorus" and the songs of the early Temptations, Drifters, and, (I believe) Buddy Holly.Update Us

Rewind Archive
In a pivotal scene between Danni and Michael at the beach, the original theatrical track was "I've Been Loving You" by Otis Redding. However, in every version shown subsequently, the music was changed to "Under the Boardwalk" by the Drifters. (In my opinion, the latter was a vast improvement to the former.)

The Fog featured the following pieces of instrumental music:

John carpenter seems to put high emphasis on the relation between images and sound, all his films are testaments to the use of soundtrack to enhance mood and atmosphere, here he uses synth to lend an air of impending doom for the Bay's locale.

Particularly when the young boy glimpses a gold coin on rocks on the beach only to see it change into driftwood bearing the ghost ships name.

Also the pounding almost progressive rock that sounds off as the onslaught begins on the church. Title track to Houseman's deadpan voice is immense also, the old man tells the story of the legend of the Fog to a mesmerising atmosphere created by the use of keyboard.

As noted above, Carpenter completely re-created the soundtrack score after he noted that his first effort was "heavy-handed and obvious".Update Us

Jump To: The Juicy Trivia!
Or use the menu to navigate
1980 MGM
1999-2020 fast-rewind.com
V4_27 Powered by Rewind C21 CMS
Please Share The 8s
Support this spam free and non-commercial site
Copy
Thank you for sharing us!