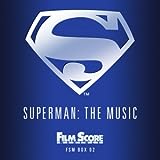 Superman III was the first album in the film series to contain both a score and a soundtrack (released as a single album with side A as the score and side B the soundtrack).

Ken Thorne continues as musical arranger on the score. Two effective musical cues accompany the chemical fire scene and the scene following Superman's victory against his evil self. In both scenes, the music slowly builds to a crescendo that the listener knows is going to culminate in the John Williams Superman march. A very interesting use of anticipation for the familiar by Thorne.

Giorgio Moroder produces the soundtrack. Surprisingly absent from the soundtrack is "Earth Angel", the only song used because of its direct relevance to the characters. However, in 80's film, The Karate Kid, Part Two, New Edition records the seminal '80s version of "Earth Angel."

Chaka Khan's "No See, No Cry" can be heard as Gus Gorman pulls his new car into the Webscoe parking lot. Roger Miller's "They Won't Get Me" is playing in the background as Gus cons security guard Brad Wilson to gain access to the computer system.

The soundtrack also includes a song by Marshall Crenshaw, a "Love Theme" by Helen St. John, and Moroder's rendition of the Williams' Superman march on a synthesizer. That last one alone is worth uncovering the bootleg Japanese CD combined scores/soundtrack to Superman II and III.

Only Superman and Supergirl had film scores released on compact disc in the United States to date. Superman II, III, and IV have not.

Superman III was available on LP and cassette in the United States.

Of the scores associated with the five Super films, including Supergirl, Superman III was the weakest musical contribution in the series yet it still has its moments. The rising hysteria in the music during that disastrous opening scene is the only good thing I can point to in that scene so I guess that's saying something.Update Us

Jump To: The Juicy Trivia!
Or use the menu to navigate
1983 Warner Brothers
1999-2020 fast-rewind.com
V4_27 Powered by Rewind C21 CMS
Please Share The 8s
Support this spam free and non-commercial site
Copy
Thank you for sharing us!