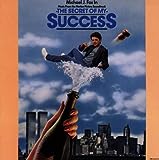 The Secret of My Success Soundtrack

The Secret of My Success featured the following songs:

The music was coordinated by the always brilliant David Foster, who also did the music for such films as "St Elmo's Fire". It has a great selection of the pop tracks from the film as well as some of Fosters electronic score. A must for 80's officianados!

The Restless Heart track used in the movie has a different title (Something I Gotta Do) and different lyrics than the soundtrack version.

"Oh Yeah", the music-theme during the changing-the-bedrooms-scene in the country house at the end of the film, is written and played by the swiss-electro-duo Yello, a very succesful group in the international techno-scene. However, be warned, it's not present on the soundtrack CD. [Thanks to Peter Baldinger]Update Us

Thanks to Luke Beaman, Uk
The song "Oh Yeah" by Yello is also featured in another cult 80s movie - Ferris Bueller's Day Off.

The Secret of My Success featured the following pieces of instrumental music:

Jump To: The Juicy Trivia!
Or use the menu to navigate
1987 Universal Studios
1999-2020 fast-rewind.com
V4_27 Powered by Rewind C21 CMS
Please Share The 8s
Support this spam free and non-commercial site
Copy
Thank you for sharing us!