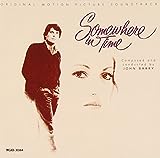 
You Made Me Love You
Jane Seymour
Add Missing Song

Somewhere In Time featured the following pieces of instrumental music:

Legendary 'James Bond' composer John Barry (that Universal Pictures obtained for this film at a BARGAIN PRICE thanks to Jane's connection with him!) has claimed that, among his many MANY brilliant compositions for many, MANY wonderful films, this is his favorite.

Barry wrote the now FAMOUS music to "Somewhere In Time" shortly after the death of his parents. Isn't it amazing how inspiration to write masterpieces can come from the most trying times? (As a songwriter myself, I know this to be true.)

Absolutely a MUST for every LIVING-ROOM! GREAT for impressing the date, setting-the-mood for the 'bedroom', getting inspired to write that next novel or song (LOL), or just plain old good meditation while driving.Update Us

Thanks to Joshua Crawford
Barry's soundtrack for Somewhere in Time is his all-time best selling score, outselling all his other soundtracks put together.

Jump To: The Juicy Trivia!
Or use the menu to navigate
1980 Universal
1999-2020 fast-rewind.com
V4_27 Powered by Rewind C21 CMS
Please Share The 8s
Support this spam free and non-commercial site
Copy
Thank you for sharing us!