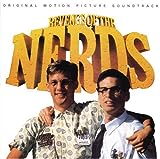 Revenge of the Nerds Soundtrack

Revenge of the Nerds featured the following songs:


Manhattan
Andrea And Hot Mink
Don't Talk
Ya Ya
One Foot in Front of the Other
Bone Symphony
Breakdown
The Rubinoos
Revenge of the Nerds
The Rubinoos
They're So Incredible
Revenge
Are You Ready?
Ya Ya
Are You Ready for the Sex Girls?
Gleaming Spires
Right Time for Love
Jill Michaels, Pat Robinson,
All Night Party
Gleaming Spires
Daisy Bell
Red Martian
Add Missing Song

The movie uses some really cool music.Update Us

Thanks to Stonkus
When the Alpha Beta's House burns down, the song is "Burning down the house" by the Talking Heads.

Jump To: The Juicy Trivia!
Or use the menu to navigate
1984 20th Century Fox
1999-2020 fast-rewind.com
V4_27 Powered by Rewind C21 CMS
Please Share The 8s
Support this spam free and non-commercial site
Copy
Thank you for sharing us!