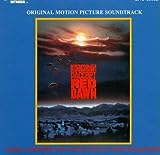 The likeable and patriotic score by Basil Poledouris has an almost epic feel to it. His score, especially the opening title sequence, borrows heavily from Aaron Copland's Fanfare for the Common Man. Considering the film's subject matter, it's an apt choice. [Thanks to Bob Patterson]Update Us

Jump To: The Juicy Trivia!
Or use the menu to navigate
1984 MGM / UA
1999-2020 fast-rewind.com
V4_27 Powered by Rewind C21 CMS
Please Share The 8s
Support this spam free and non-commercial site
Copy
Thank you for sharing us!